Meeran belonged to everyone - gatewaylitfest.com 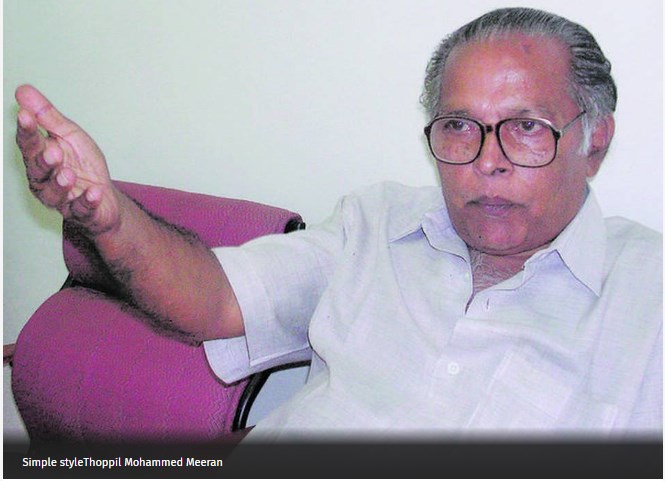 Never mind not meeting him, his world was so familiar

Should I have started translating the short stories of Thoppil Mohammed Meeran at least a year earlier, is a question that will always gnaw me. If I had, I would have met him. But it was in the end of 2018, that I began my work. I spoke to him to get his permission. He agreed.

I had three collections of short stories to choose from. He asked me to send the translations to him as and when, and that he did not like to read from a computer. So he read two stories. I planned to go to Tirunelveli after May 15, because he had a health setback. The family hoped he would be home by then. But it was a date too late.

Reading a book is one thing, reading while translating is quite another. I shared with many friends my sense of wonder at this new world he was leading me through. I had translated Chudamani before, but she and I were similar in many ways. This was different in every way and challenging.

His people are rooted in reality, but alongside we meet many who are obviously unwordly or located in a dimension of a different reality, people who ride away in horses which do not touch the ground, ruhaniyats, Arabi captains and so on.

The assault on nature, on human relationships, on beauty and the resulting detritus, are written in simple spare language, the silences speaking to us more than what is written. The grandson tells his grandfather, “The problem is you have lived too long.”

He writes about beautifully carved objects, boxes, almirahs and doors, then they are devalued in some way. Are they metaphors for an aesthetic sensibility of the past? There was the space and the time for it, not any more.

He writes about trees, birds, green fields and bubbling wells which have been there for two generations, then the J.C.B demolition monster moves in. Snakes and boys playing cricket are forced out.

Children come alive in his books, the innocence, the cruelty, the playfulness, the selfishness are all so naturally painted. A boy wants kaliyodakka, a snack. He does something so terrible, and Moothumma, the father’s elder wife is utterly humiliated. “Don’t punish him,” she says. A boy’s classmate kindly informs him that the boy’s Umma never had a child of her own. Little boys who want to celebrate Perunaal deceive Calendar Bawa whose eyes are dimming.

Nondi Uppa the shop owner has no clue of the history of the town, nor is he interested in the town historian Abdul Rahman’s tales. But Noorunnisa overhears, her imagination gets all fired.

The Arab captain of long long ago comes for her and she is all fired with ecstasy. This is an unforgettable story, the woman’s searing longing is written so well.

Vappa turns down all pleas to have a permanently fixed ladder to access the loft. Moothumma supports Vappa’s stubbornness. Why? The access to the loft is in her iron control. Just a sentence, and in it we know the ubiquitous addiction of power, and the reluctance to let go. It could be a loft, it could be the corridors of power. Not much difference.

There is an all-enveloping compassion in his world, it is a compassion which sees all the ugliness and meanness and is yet compassionate. Without brandishing any banner, he tells me of the lives of his people the Muslims who live in the southern tip facing the sea.

I know how they preserve their pickles, make their chips, I know the feast that children enjoy on Perunaal, I know the power and lack of it of the women there, I know the terrain, the roaring sea, the rocks, the lush fields, I know about the beliefs, the superstitions, practically everything. Meeran just opens the door, he does not drag us by the scruff of our necks. And above all, he is just himself, there is not an iota of pretence or fake. His writings dissolve all differences.

And the readers, who are outsiders to the place and the people, who think, “My God! This is so different!” will slowly murmur softly “This is so familiar too, this is me!” The readers who belong to his place must be happy that their world has opened itself to the outside. The oft quoted “Yaadum oorey yavarum kelir” is the spirit that permeates his words. He belongs to all, and everyone belongs to him.

If I had started translating the short stories of Thoppil Mohammed Meeran at least a year earlier, I would have met him. That is an aching regret. But translating Mr. Meeran, I see him, speak to him and feel the thoughts of a writer universal. So I will celebrate that, instead of indulging in futile regret.