Poet of pain and death - gatewaylitfest.com 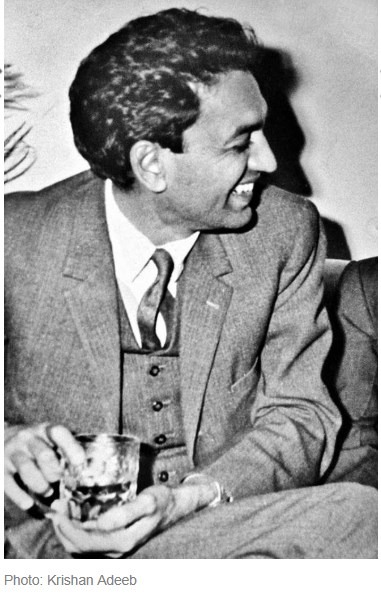 Dichotomy ruled his life. He was dubbed birha da sultan by Amrita Pritam, yet his poetry is broadly placed under the literary movement of Romanticism. Critics and contemporaries call him a modern poet but his language was rooted in tradition. He never completed his degree, yet at 28 he was the youngest recipient of the Sahitya Akademi Award. From patwari to banker, he dabbled in various professions, yet the world knows him as a poet, author and playwright. In his brief life (he died at 36), even shorter as as a writer, Shiv Kumar Batalvi defied definitions and conventions alike.

But then poetry is never born within norms, says Punjabi poet and playwright Surjit Patar. Patar, who was given Sahitya Akademi award for his work Hanere Vich Sulghdi Varnmala, agrees with Amrita’s epithet as he calls him ‘a poet of birha (separation)’. “He may have borrowed a few things from traditional poetic styles like Sufi, folk or qissas, or even ancient poets like Baba Farid or Shah Hussain, but he made it his own. The beauty of his language was that it was rooted in tradition but it was his unusual similes that stood out.

“His poetry had a musical flow and his imagery was unique — forgotten words and practices that depicted the cultural life of Punjab now lost to time … ‘Bhe bhe sugandhiya ch, banna fehe chananni de’ (soaked in perfume, I put wads of cotton soaked in moonlight). Mothers would soak cotton balls in milk and put on the eyes of children,” says Patar.

Punjabi poet Amarjit Chandan agrees. “His unusual similes were his real forte. He is unparalleled in that. In some of his works we see Punjabi ‘language in a state of savage purity’,” he says.

Poetry came effortlessly to him, says Punjabi writer Gulzar Singh Sandhu. Not just purity of thought, his verses were steeped in chastity and poetic sublimity.

Chandan is, however, at variance with others in calling Shiv a modern poet. “Every poet carries literary tradition with him. Language by definition is the tradition. A writer receives it through folklore and religious and classical texts. In our case it was Lokbani, Sufibani and Gurbani. Shiv may have called his collection of poems based on Farid’s shlok in Guru Granth Sahib as Birha tu Sultan but it does not make him a Sufi poet. Some scholars have also compared him with great Sufi poet Shah Hussain. Shiv used Sufi diction as a tool but not as a vehicle of its metaphysical philosophy.”

Modern or not, Shiv’s poetry had a folksy quality. However, his fine aesthetic sense raised him above the level of a folk poet, says Punjabi critic and literary historian Tejwant Gill. “He drew his imagery from nature and rural life. He could relate and inter-relate these images hauntingly. At his best, he could award human proportions to the sun, the moon and the stars. At the same time, he could award their significance to humans, even of the humblest sort, like a washerwoman,” says Gill. 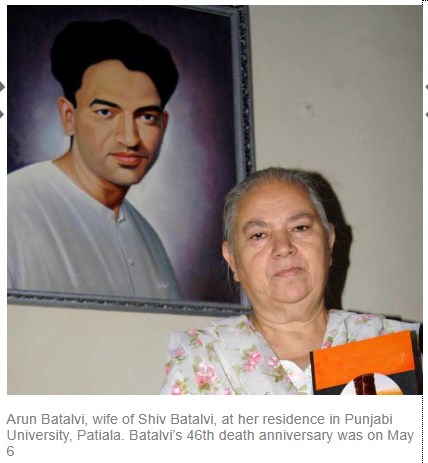 Pain and pathos may have ruled his poetry but his children remember him as a loving, hands-on father with a quick wit. His daughter Puja Jaidev, who is based in Chicago, fondly recalls, “Whenever we fell sick, he would keep awake all night to take care of us. He would take us on long walks in the evening and hold our milk bottles in his pocket.”

Puja was only three-and-a-half-year old when Batalvi passed away. Most of her memories are built on the impressions she has gathered from her mother, Arun, and   the poet’s friends. “I have built an image of my father by listening to the stories that our mother and his close friends shared with my brother Meharban and me. I have very few memories of him and these are very special and personal to me,” she says.

Dr Meharban Batalvi, who is based in Calgary, echoes his sister’s sentiments. “I was five when my father died. In these 46 years, there has not been a single moment when we have not missed him.”

So what does he think of his father’s poetry? “I started reading my father’s poetry during childhood because everyone talked about it. However, I couldn’t understand much. At every stage of life, poetry can have different meaning and layers. Every person understands poetry, according to his/her own experiences or perceptions. Hence, some may find his verses worldly while others may call it romantic. For me, my father’s poetry is spiritual. A man’s deeds make him immortal. My father will live forever in his verses.”

No one can refute that. It’s the truth. Batalvi lives on in the soul and soil of Punjab and the hearts of those who love Punjabi poetry.

A glimpse into his work