Romi Konkani: The story of a Goan script, born out of Portuguese influence, which faces possible decline - gatewaylitfest.com

‘Hi mhoji kudd‘. This is the Konkani phrase that greets visitors to Old Goa’s majestic Basilica of Bom Jesus. It is a phrase written on the altar in bold Latin characters, and it means ‘this is my body’, a phrase from the Catholic Eucharist (a translation of the Latin ‘hoc est corpus meum‘). Its religious significance aside, the inscription is marker of another prominent facet of Goan culture — Romi Konkani, a widely used, standardised Latin-based writing system, used by tens of thousands of Goans to write in their mother tongue.

The word ‘standardised’ is significant here. Unlike the ad-hoc transliteration widely used for most other major Indian languages (especially online), Romi Konkani isn’t a placeholder for a “traditional” script (read: a Brahmic script, like Devanagari or Eastern Nagari). It is a traditional script, one complete with its own set of spelling conventions and literary history in print. Romi is the only such Latin-based writing system used by an Indo-Aryan language in India.

This written tradition developed as a result of Goa’s sustained cultural interaction with the Portuguese State, and the Portuguese language, and although it has a history of many centuries, its place in modern Goa is somewhat shaky — a victim of linguistic nationalism’s homogenising tendencies.

In fact, Romi Konkani takes numerous cues from the spelling system of Portuguese itself. It differs significantly from the ad-hoc transliteration used by speakers of literary Indo-Aryan languages on a number of points. One of these is the way Romi Konkani deals with nasal vowels. Unlike English, (but like Konkani and many other Indo-Aryan languages) Portuguese features nasal vowels, denoted at the end of words with a ‘vowel + m/n’ sequence, like in ‘homem‘ (where the final -em is a nasal E). Romi Konkani uses the same formula: The M at the end of the names of world-famous coastal Goan villages like Benaulim, Candolim, and Mandrem actually indicates that the vowel preceding it is nasalised.

Another distinctive feature is the usage of the letter X to denote the “sh” sound, as in xacuti, pronounced sha-coo-ti. This too is directly lifted from Portuguese convention, like in Portuguese, peixe (fish) pronounced pei-shi.

An interesting feature of Romi Konkani that isn’t found in English, the ad-hoc transliteration of other Indo-Aryan languages, or Portuguese, is the usage of doubled consonants to represent retroflex sounds. Moratthi is Marathi, while Bharot is Bharat.

While minor, this feature is crucial in ensuring the consistency of written Konkani by removing the possibility of confusion between dental and retroflex sounds. It also helps strengthen its nature as a standardised script by making Romi markedly less ambiguous than, let’s say, popular ad-hoc Hindi romanisation, which is unable to distinguish between the d in daal (lentils) and the d in daal (to put). 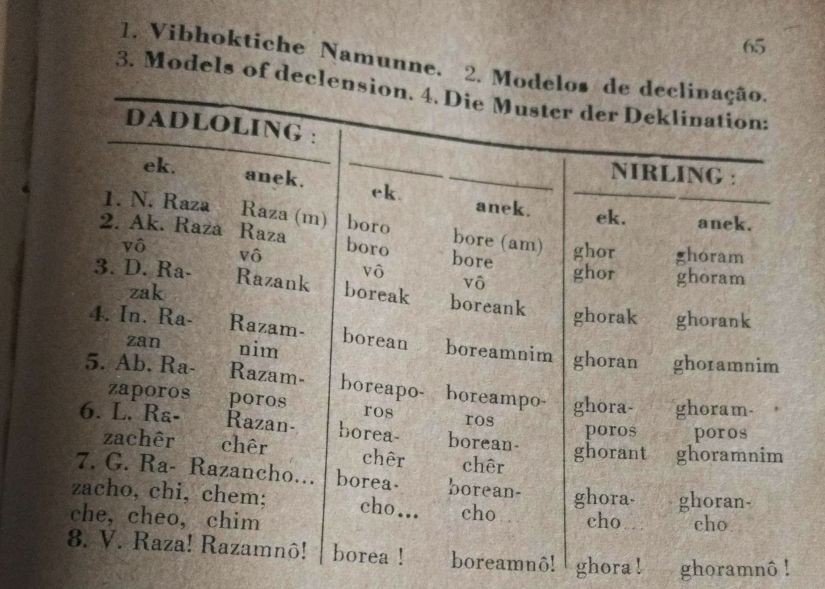 A page from a primer on Konkani

The birth of Romi Konkani

Romi’s roots go deeper than one might expect, leading all the way back to the early Portuguese colonial period in the mid 1500s, centuries before the British had consolidated their control over India. When European missionaries first arrived in Goa in the early 16th century, they observed that Konkani was written using the old Kannada-Telugu script, in a local variant called Goykānaḍī (Kānaḍī means Kannada in Konkani and Marathi). Sanskrit and Marathi, languages used by local Brahmins for religious purposes and scholarship, were written in Devanagari.

The Catholic Church’s Fourth Provincial Council of Goa in 1592 decreed that the Christian doctrine be translated in local languages, so as to reach the common person. As a result, Konkani began being used a vehicle for the dissemination of the teachings of Christianity on a much larger scale.

This tradition, however, took on an entirely new avatar with the work of Thomas Stephens, an English-born Jesuit (and contemporary of Shakespeare’s) whose fascinating story is recounted in Jonathan Gil Harris’ book The First Firangis. Stevens would end up wholeheartedly imbibing Goa’s literary traditions, and combined it with religious zeal to produce some of the finest Christian literature India has ever seen. Although he began with a Marathi-language epic, the Krista Purana, he later turned his effort towards Konkani, a language he had become fluent in. While at the Seminary of Rachol, he wrote the Arte da lingoa Canarim, the first grammar of an Indian language, and the Doutrina Christam, which were also the first books printed in Konkani.

Stevens wanted to print his works in Devanagari, but typefaces in the script were not usable. He had to resort to employing the Roman script instead, devising a spelling system to represent Konkani sounds using the script.

In a sense, Stevens can be seen as the father of Romi Konkani; modern Romi Konkani still uses many of the conventions Stevens himself devised in the early 1600s, like the doubling of consonants to represent retroflex sounds. However, just a few decades later, the Portuguese would go on to greatly restrict the public usage of Konkani, a move that would virtually expel the language from the written sphere.

The script’s place in the revival of Konkani

Following the pioneering effort by Stevens when he wrote Arte da lingoa Canarim and Doutrina Christam in Romanised Konkani, Romi would go on to play a key role in another phase of the language’s written history. It facilitated the Konkani revival of the late 1800s and early 1900, aided by the proliferation of mass reading, widespread literacy, and a growing reader base. These publications took the forms of journalism and creative writing.

Goa’s Catholics were educated in Portuguese (and increasingly, English); it was only natural that they would choose to write their own language in the very same script they already read and written in.

Rochelle Pinto’s book Between Empires notes that by the beginning of the 1860s, Konkani publications produced by and directed at a readership quite distinct from the Goan elite [who used Portuguese, English, and Marathi] emerged. As a rule, these publications were printed in Romi. Devanagari, when used by Goans, was solely for Marathi. In fact, the anthropologist Kyoko Matsukawa writes that the Konkani literary sphere was dominated by the Roman script before 1961.

However, in the beginning, Konkani journalism was always an add-on to publications already using both Portuguese and Marathi. Interestingly enough, this tradition emerged not in Goa itself, but in British Bombay and Pune, by and for a steadily growing community of migrant, mostly working class Goans.

According to the Goan linguist Madhavi Sardessai, the first Roman Konkani monthly titled Udentechem Salok (Lotus of The East) was launched by the Catholic priest Eduardo Bruno de Souza in 1889, in Pune. This marked the dawn of creative writing in Konkani, and de Souza would also write the first Konkani novel, Kristanv Ghorabo (Christian Home). Incidentally, de Souza was attached to Rachol Seminary, just like Thomas Stephens two centuries before him.

One of the founding fathers of modern Konkani literature and a key figure in the British Bombay-based Konkani revival of the early 1900s, Shenoi Goembab (1877-1946), used Romi at the beginning of his career, before switching to Devanagari.

Language woes, and the preference for Devanagari

In the decades following Goa’s integration with the Indian Union in 1961, debates over which script and written language should come to represent the state’s identity have raged on, even briefly taking a violent turn in the 80s. The usage of Romi Konkani was seen as representative of the Goan Catholic identity, traditionally Lusophile.

Meanwhile, increased knowledge of English ate into Romi Konkani’s readership, coinciding with the Second Vatican Council’s (1962-1965) directive to translate worship materials into local languages. This meant Romi Konkani’s association with the Church was reinforced just as English took over large parts of its secular function, particularly in journalism.

Since Romi isn’t a Brahmic script, its usage is seen as somewhat suspect by those in the Nagari camp, less legitimate even — ironic given that Konkani in Devanagari has less than 150 years of history. 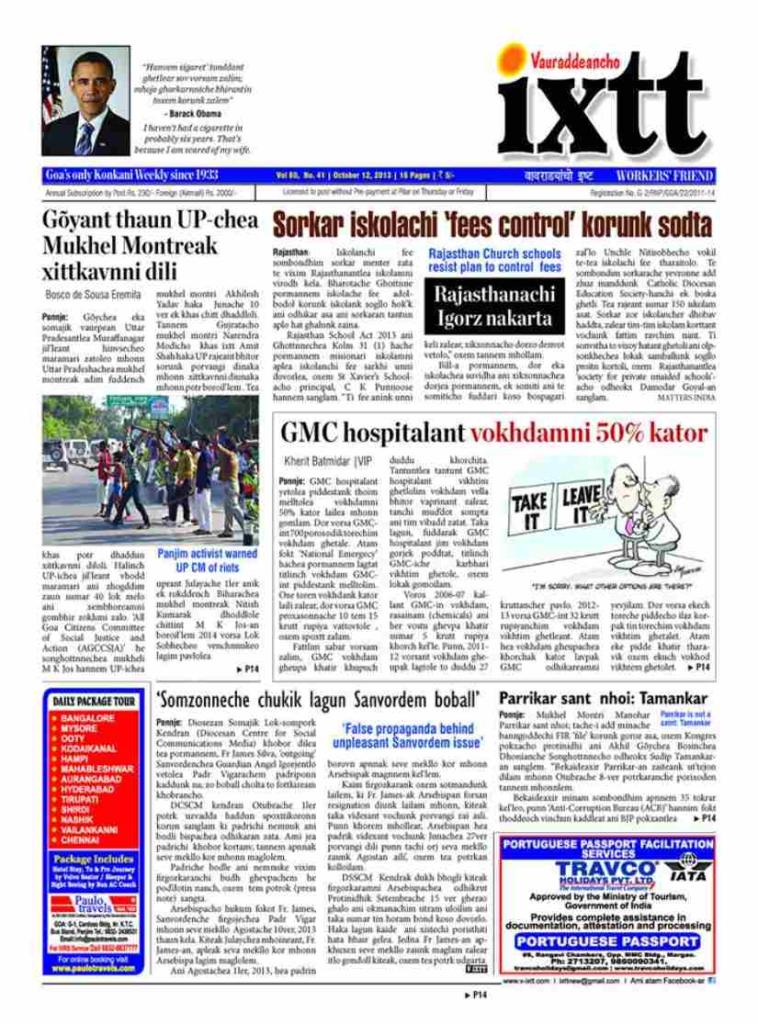 The front page of Vavraddeancho Ixtt (from 2013), Goa’s only newspaper written in Romi Konkani

Eventually, Konkani was made Goa’s official language in 1987, followed by its addition to the list of India’s Scheduled Languages in 1992. However, the Goa Official Language Act only recognises Konkani in the Devanagari script, leaving Goans who use Romi unable to communicate with the state government in their own language. They are forced to use English instead, something that obviously does not do Konkani any favors. In addition, the Sahitya Akademi only recognises Konkani literature written in Devanagari, and ignores works in Romi.

What this essentially means is that a large section of Goans with an active stake in Konkani’s growth, development and usage, have had their own literary traditions in Konkani ignored, excluding them from participation. The Konkani speaker community’s efforts to build a stronger written tradition have been impeded by the language’s fragmentation along community and regional lines. As it is, written Konkani exists in a precarious position, with a fixed written standard yet to emerge, its speakers preferring other languages for written purposes.

Written Konkani can scarcely afford such a debilitating schism in its own homeland of Goa; a compromise, or ideally, recognition of both traditions must be agreed upon by Konkani speakers. Thankfully, cultural groups in Goa and even citizens have taken an active role in opposing this marginalisation of Romi Konkani, especially the Dalgado Konknni Akademi, set up for the development and promotion of Romi. Technology is helping their cause — there is even a Wiki in Romi Konkani.

With Romi Konkani’s exclusion comes the exclusion of a large corpus of written material in the language, and the history and traditions this corpus embodies. Indian linguistic nationalism — with its ideals of one nation, one language, one script — has served to obscure traditions of script diversity in other linguistic regions. A similar erasure should not befall Konkani.

Karthik Malli is a freelance journalist who writes on the intersection between language, history, and culture