Parents must encourage their children to read books: CoP - gatewaylitfest.com 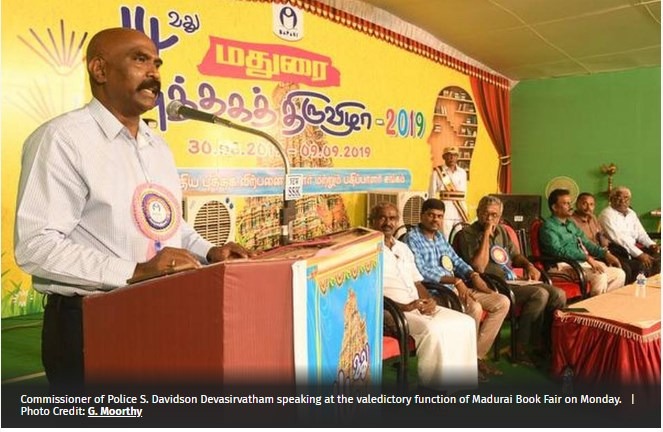 Curtains down for Madurai Book Fair

Parents put pressure on their children to perform well in their academic studies. Both parents and teachers must encourage students to develop their reading habit for improving their knowledge, said Commissioner of Police S. Davidson Devasirvatham at the valedictory function of the 14th edition of Madurai Book Fair on Monday.

Corporation Commissioner S. Visakan, in his address, said that he was confident that the book fair would inculcate book reading habit among students. Prizes for school students who took part in elocution competition conducted by the organisers were distributed.

Hundreds of readers did some frantic buying on the last day of the book fair. S. Varunika, a student of Class 11, said that the book fair had a good collection which had improved over the years.

P. Maila Velan, vice-president, Booksellers’ and Publishers Association of South India (BAPASI), the organisers of the fair, said sales had increased when compared to last year. “The number of walk-ins has reached 2.5 lakh. Reading trend has caught on among youngsters of the city and it was witnessed during the book fair,” he said. The sales picked up only in the last three days, said M. Kumar of Spider Books Publications. “The first week was depressing due to lower sales. Though the number of visitors has increased, the sales of books is not as expected,” he said. He, however, added that this trend would not deter him from setting up a stall in the book fair next year too.