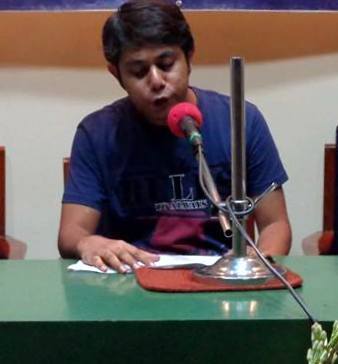 Shamik Ghosh, started writing when he was in college. His first short story was published in eminent Bengali Literary Magazine ‘Desh’ in 2003. After completing his graduation in BSC(Physics) Shamik joined a Private Sector Bank in Kolkata. After a small stint he moved and joined another PSU Bank and was posted in Ahmedabad and then went to Mumbai in the Corporate Strategy and Communication Department of the same Bank. As a Corporate Communication professional he had access to the upper reaches of Mumbai and yet, the trains he travelled on, journeyed through some of the poorest urban areas of India. He decided to take up writing once again. His second short story, a decade after the first, got published in a Bengali daily.

In 2014, Shamik left his job and returned to Kolkata to concentrate on writing and filmmaking. His short stories regularly feature in the prominent magazines and dailies of Kolkata and Bangladesh.
In 2016, his first short story collection ‘Elvis O Amolasundari’ was published by Sopan Publishers. In 2017, he completed his first short film ‘Trapeze’
In 2017, Shamik Ghosh received the Sahitya Akademi Yuva Puraskar in Bengali for ‘Elvis O Amolasundari’. He also received the Ina Chanda Smriti Puroskar from one of the oldest literary Institution of India, Bangiya Sahitya Parishad as an emerging fiction writer. At present he is working on his first novel. He is influenced by the literary styles of Gabriel Garcia Marquez, Milan Kundera, Salman Rushdie, Samaresh Basu, Shirshendu Mukhopadhyaya, Syed Mustafa Siraj, Akhtaruzzaman Elias etc & believes that a man should go beyond his geographical location & move to places both known and unknown.