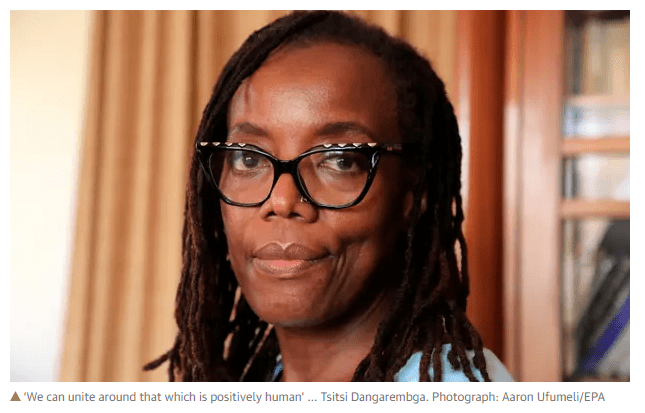 Author, who was arrested last year in Harare while protesting against corruption, is hailed by judges as a ‘voice of hope we all need to hear’

Tsitsi Dangarembga, the Booker-shortlisted Zimbabwean writer who was arrested last year in Harare while protesting against corruption, has been awarded the PEN Pinter prize, praised for her “ability to capture and communicate vital truths even amidst times of upheaval”.

The prize is given by free speech campaigners English PEN in memory of the Nobel laureate Harold Pinter. It goes to a writer of “outstanding literary merit” who, as Pinter put it in his Nobel speech, shows a “fierce intellectual determination … to define the real truth of our lives and our societies”. Previous winners include Chimamanda Ngozi Adichie, Margaret Atwood and Linton Kwesi Johnson. 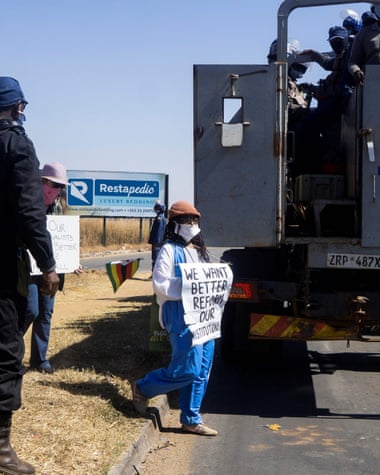 Tsitsi Dangarembga (centre) and a colleague Julie Barnes are arrested during an anti-corruption protest in July 2020 in Harare. Photograph: Zinyange Auntony/AFP/Getty Images

Dangarembga is the author of Nervous Conditions, which she wrote when she was 25, and which was described by Doris Lessing as one of the most important novels of the 20th century. The story of a village girl called Tambudzai, it was followed by The Book of Not, about Tambu’s teenage years, and the Booker-shortlisted This Mournable Body, the third part of the trilogy, set in the postcolonial Zimbabwe of the 1990s. Dangarembga is also a film-maker, playwright and activist, who was arrested last summer while protesting in Harare, charged with intention to incite public violence. Her case has not progressed, and free speech organisations, along with her fellow writers, have called for the charges against her to be dropped.

“I am grateful that my casting – in the words of Harold Pinter – an ‘unflinching, unswerving gaze’ upon my country and its society has resonated with many people across the globe and this year with the jury of the PEN Pinter prize,” said Dangarembga. “I believe that the positive reception of literary works like mine helps to prove that we can unite around that which is positively human.”

The Guardian’s associate editor for culture and English PEN trustee Claire Armitstead praised Dangarembga’s “unusual and exemplary career”, which has seen her make “things happen for other people as well as achieving in her own right”.

“Through her trilogy of novels … she has charted the development of Zimbabwe from a British colony to an autocratic and troubled free state,” said Armitstead. “In doing so, she has held a magnifying glass up to the struggles of ordinary people, in so many parts of the world, to lead good lives in the increasingly corrupt and fractured new world order. Hers is a voice we all need to hear and heed.”

Armitstead’s fellow judge, the literary critic and publisher Ellah P Wakatama, said that Dangarembga’s work “demonstrates diligence, stoicism, and the ability to capture and communicate vital truths even amidst times of upheaval … It is an honour to join my colleagues in raising up the voice of a woman whose words have written the story of my country of birth with a clarity, bravery and honesty that is a rare and precious gift,” she added.

Dangarembga will deliver a keynote speech at a ceremony on 11 October, when she will announce the co-winner of her prize – an International Writer of Courage who is “active in defence of freedom of expression, often at great risk to their own safety and liberty”.