Will Mussoorie’s Cambridge Book Depot open after the pandemic? Residents and visitors are hoping so - gatewaylitfest.com Those who know the bookshop cannot wait to lose themselves again in its narrows aisles packed with books on both sides.

Saturday may be the day devoted to the Hindu god Shani, an occasion for some in Mussoorie to do the rounds of shops, collecting alms. But near the post office downtown, there is one establishment that is already overpopulated with zealous devotees. This is the Cambridge Book Depot – Mussoorie’s oldest and only general book store – which hosts a special Saturday event for a very special local deity:Ruskin Bond.

For an hour or two in the afternoons on “Saturn’s Day”, Bond – author of over 500 popular works of fiction, non-fiction and poetry – sits outside Cambridge to meet fans and readers and sign copies of his books. On the busiest days, hundreds of tourists come for a darshan.

Bond, who recently turned 87, is one of the many notable authors and literary figures who call the “sister” towns of Mussoorie and Landour home. It’s a picturesque area, tucked between snow-capped Himalayan peaks and the Doon Valley below. The cooler temperature and cleaner air provide a respite from the heat and dust of the plains; the heavy monsoon drenches the hillside and turns it green, providing the perfect backdrop for writers and readers. 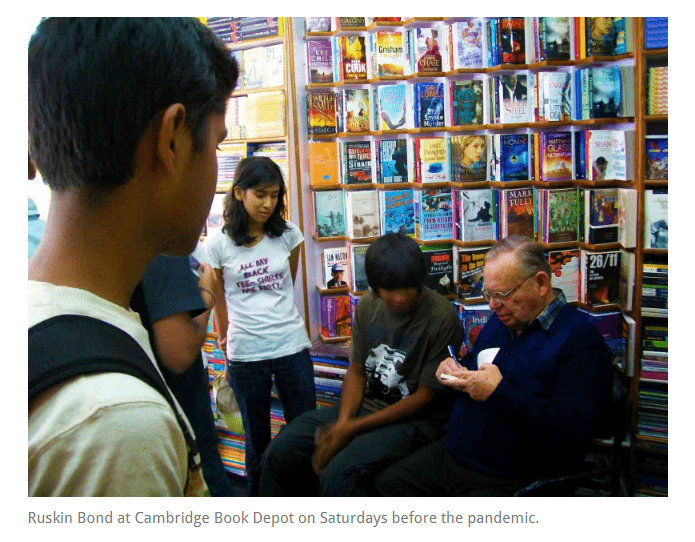 It was in the early years after Independence that Laxman Das Arora established Cambridge Book Depot on Mall Road, back in 1952, in the same small nook beside the post office where it now stands. Arora was born in Dera Ghazi Khan, now in Pakistan, in 1924. As an adolescent, he moved to Lahore where he worked as a “helper” in the “original” Cambridge Book Depot.

A decade later, Laxman Das Arora set up his own bookshop in Saharanpur and gave it the same name. His health forced him to leave the plains and find a home in the hills; that’s how he ended up in Mussoorie – and took Cambridge with him.

Until he died a few years ago, the figure of Lakshman Das Arora was a regular sight for customers, sitting opposite his son at the store. His son, Sunil Arora, is now the proprietor, and has been the ubiquitous face of Cambridge since the late ’70s, greeting tourists, readers, and locals, and answering questions about the latest books available.

Today, behind the usual bestsellers that welcome visitors – the Ruskin Bonds, the Shashi Tharoors, the JK Rowlings, the Khushwant Singhs – Cambridge extends inside into something of a maze, with aisles so narrow that any careless movement might bring the Jenga-like stacks of books crashing down.

Here, in this labyrinth, there is always a second row of books behind the haphazard first one, and perhaps a third row behind the second. There is no order here – Dostoevsky squeezes in next to Rushdie, Dickens near Morrison, Murakami beside Austen. Still deeper at the back are stacks of children’s and young adult texts, greeting cards, posters, stationary, and more.

Stephen Alter, a local resident and well-known writer whose books feature prominently in the show window, said, “It’s an important institution, it’s not a bookstore that you can really browse in. You have to walk sideways down the aisle between these lines of books. Sometimes, you can’t even read the spines, it’s so tightly packed. It’s sort of like going into this cavern of books. I like that it’s called a depot. The best Hindi translation for it would be mandi. Cambridge is a warehouse of books and ideas.”

Ganesh Saili, another prominent local writer, credits his own love for reading and literature to the bookstore. “Cambridge has been here all my life,” he said. “My friends and I would hang around Cambridge all the time just browsing through books, sit near the shop or on the steps, and read the books that we couldn’t afford to buy.”

Sunil Arora is, of course, passionate about the business of books – and about their texture, their smell, their feel. “It is such an elaborate trade,” he said, “being among thousands of books, with new ones coming every day.” Ironically however, he added that he doesn’t necessarily love reading himself. “I never graduated beyond the Hardy Boys and Enid Blyton. I’m not a reader, but I’ve always been interested in the trade.” For Cambridge, being located in a tourist centre meant having access to a potentially large number of buyers. “Until the ’70s,” said Sunil Arora, “my father would shut shop in the coldest months in the hills – from Diwali till mid-March – but nowadays, until the pandemic, we would be open all year round, since tourists came in all seasons.”

Like it did it for everyone, things changed for Cambridge when the pandemic struck with its first wave in early 2020. “For three or four months during the lockdown last year, we had no business at all,” Sunil Arora said. “But things changed in October – it was like tourist season again (usually only in the summer months in the hills). Business picked up in a big way. The next five or six months were unbelievable. We were back on our feet.”

With the second wave from April 2021, however, the town shut down again. Nowadays, Mall Road stands largely deserted, with the hotels, restaurants, novelty stores, and the ropeway to theGun Hill all locked and bolted. Every establishment except for chemists and grocery stores has been shut down. The same fate has struck Cambridge.

After the first wave, Sunil Arora was apprehensive about bringing new stock of books when the shop reopened in October. But sales picked up, and there seemed to be some hope on the horizon. This summer, however, he sounded apprehensive about ordering the same quantities as before.

Cambridge made barely 40-50 percent of its annual sales in 2020. “We don’t really have a clear plan,” said Sunil Arora. He has had a couple of assistants in the over the years, but “if the pandemic continues, we’ll have to make some hard decisions.”

In the past, Sunil Arora’s brother Surendra used to operate a printing press around the corner from Cambridge. The bookshop also catered to textbooks orders from many of the local schools in the city. That side of the business had to be paused because of the added logistical drain, and Sunil Arora said there are no plans yet to restart these efforts diversify into any other means of income.

Unlike independent bookshops in bigger cities which have continued off-site home-delivery to customers, Cambridge just doesn’t have enough of a local readership to warrant staying open. “People here are not encouraged to stay indoors and read, or to support independent bookshops like elsewhere in the country,” said Sunil Arora. 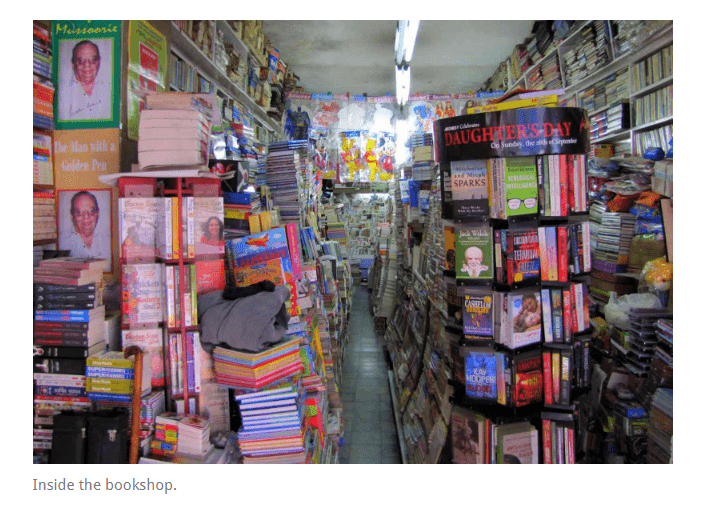 Those among Mussoorie’s residents who swear by Cambridge are, naturally, not pleased with this state of affairs. “A town without a bookstore is, in many ways, a town that doesn’t have a complete intellectual life,” said Alter. “I think that if you don’t have a bookstore, it means that something is missing. I don’t want to call it the ‘soul’ of a town – but it’s more like an ‘intellectual spark’ or ‘intellectual axis’.”

“Sunil has a very personal touch with all his customers,” said Aruna Singh, a Mussoorie resident who said her family has been living in the hill-station for over 150 years. “His smile goes a long way in business.And there’s nothing like the days Ruskin comes down. It’s a big thing for Mussoorie – a much-needed tamasha. It brings raunak to the whole area, the whole bazaar, from Cambridge to the ice-cream softywallahs.”

There is little “raunak” in town now. The silence around the bookshop and the Mall Road area is loudest on Saturdays. “We used to do something special for Ruskin Bond every year on his birthday (May 19),” said Sunil Arora. “We used to have a huge cake, snacks, and five or six hundred people would come to the shop. We would launch his books, do signings, interactions, interviews.” Now, a second consecutive year has passed without this celebration for Bond in the bazaar.

“As of now, we don’t know how and when we’ll reopen, how things will be,” said Sunil Arora. “Things are much more severe this year, so many have lost their lives. Many have lost their dear ones. People may not be in a position to move around. It might take three, four more months. It’s too early to say. It’s very unpredictable.”

This series of articles on the impact of the coronavirus pandemic on publishing is curated by Kanishka Gupta.