We need to make a choice between freedom and fascism now: Nayantara Sahgal - gatewaylitfest.com

Writer and activist Nayantara Sahgal, 91, on writing about the ‘unmaking of India’, the role of fiction in politically turbulent times and why there’s no destroying hope. 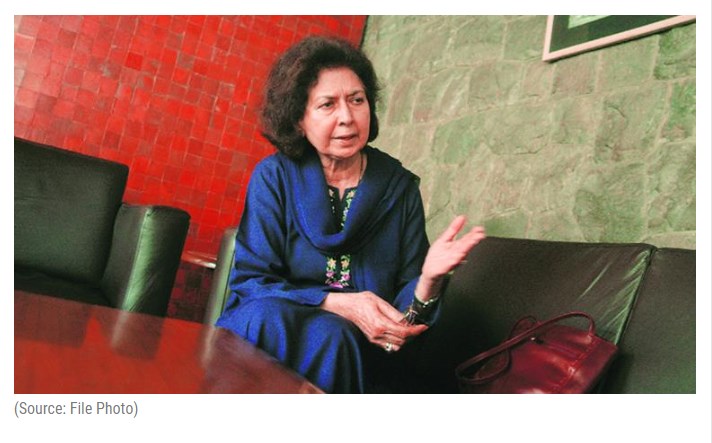 HOW DEEP is the connection between the novels you write and the times we live in?

The quote from the film, Follow the Fleet (1936), that you have picked as a start to this novella — ‘There may be trouble ahead/ But while there is moonlight and music and love and romance/ Let’s face the music and dance…’ — is it about the elite in a world blighted by trouble that they must respond to by dance and music?

It’s not at all about the ‘elite’. It is a time of terrible tragedy, when the young gay man, the dancer called Prahlad, on his wedding day — at a time when to get married to a man is not legal — holds a private party and decides, as he is a dancer, to face his situation bravely. And what else could be a statement about his spirit in the face of adversity, and tragic, troubled times, but to step up and dance?

Despite being Indira Gandhi’s cousin, you were one of the staunchest critics of the Emergency. Some people refer to the present as an ‘undeclared Emergency’. What is the difference?

Now, whatever is happening is happening under the cover of democracy. Between 1975 and ’77, we knew where we were, with the Opposition jailed and the Constitution suspended. Today, we are in a situation which is constitutionally a democracy but bears all the hallmarks of a dictatorship. Freedom of expression is suppressed, there is the banning of those who do not agree with the ruling party, none of the criminals killing and lynching people are arrested or acted upon. Those who generate hate are free and provided protection instead, by the police.

Is it worse than a declared Emergency?

It is horrifying because people who don’t care, say it is fine. India is famous for people looking the other way when people die on the streets or worse. So the elite and the educated, who know what is happening, don’t think there is anything wrong. This is because of conspiracy theories floating around all the time — the poor, Muslims and Dalits are being lynched while they go about their jobs.

What is the role of fiction and writing in responding to these times?

Writing is a tool of political activism. I am engaged in that. I am not marching on the streets now, like I was in the days of JP (Jayaprakash Narayan) but writing is very dramatic and very essential as we have seen, in Latin America, and in Spain, at the time of dictatorships and the civil war. All the arts — writing, cinema and painting — are political acts.

What is the role of public intellectuals in such a society?

By this, I think you mean academics who take public positions, like (historian) Romila Thapar? They are very important as they shape young minds. Therefore, the stand they take publicly is very important. We are at a crossroads now, we need to make a choice between freedom and fascism. There is nothing in between. Public intellectuals articulate that.

In January, an invitation extended to you by a literary organisation in Maharashtra was withdrawn, but you did go?

The invitation to the All India Marathi Literary Meet was rescinded by the organisers. But I had no idea the outcry there was from the Marathi writers. The support I got was incredible. There were cultural and social organisations that read out my speech in Maharashtra, so thousands of people heard it, who would not have done so but for the ban! I am half-Maharashtrian, my father was a Sanskrit scholar, a Gandhian. He had translated Kalhana’s Rajatarangini (1935). This has been recently translated into Marathi. So they felt one of their own was slighted. So actors, writers, all turned up in Mumbai, and while I am not into making public speeches,I talked. I thought I could make it more effective, as I was in Mumbai for a function to mark Mahatma Gandhi’s murder on January 30, to tell them about how upset I was that in the Mumbai film industry, no prominent star/colleague of Naseeruddin Shah stood by him when he spoke up on the environment in the country. I reminded them of how the movies supported the national movement when there was complete censorship. The British never allowed the mention of azaadi anywhere. So what did the films do? They got around it by putting it into songs. In a famous movie of that time, called Naya Sansar (1941), where Ashok Kumar played the lead, there was a song, Ek naya sansar banaayein, aisa ek sansar, ke jisme dharti ho azaad, ki jisme jeevan ho azad, ki jisme Bharat ho azad. And I said, look at you today.

What is the role that fiction plays at these times?

As far as I am concerned, when I take a character and put her on a page, it takes a life of its own. Most of my characters have written themselves. As William Faulkner famously remarked, he had a hard time running after his own characters. It is this imagination that dictators fear so much about the arts. They do not understand the art, but know that the art survives the artist. Dictators, therefore, want to silence artists and the imagination. You see the focus on censoring films and imaginary characters in cinema, too. Art of all kinds is our hope in this situation.

Are you hopeful today?

I know that I must fight it. My upbringing is such that I am clear that this is what I have to defend. In the Emergency, too, I was asked, why I was fighting the family. I said because it was my family’s legacy that was being hurt. The Nehru legacy was my legacy and so I fought for it. That was my instinct and common sense — to fight and not give up hope.

The mythological Prahlad is untouched by fire. In naming one of your characters after him, did you mean to convey hope that cannot be quashed?

Yes. Prahlad is the character whom fire cannot burn in the story of Hiranyakashyap. My character has his feet burnt to break his spirit as he is a dancer, and yes, he survives.