This is the worst time to be a film maker: Adoor Gopalakrishnan - gatewaylitfest.com

The veteran filmmaker felt that the government is doing everything to stop filmmakers from making sensible cinema. 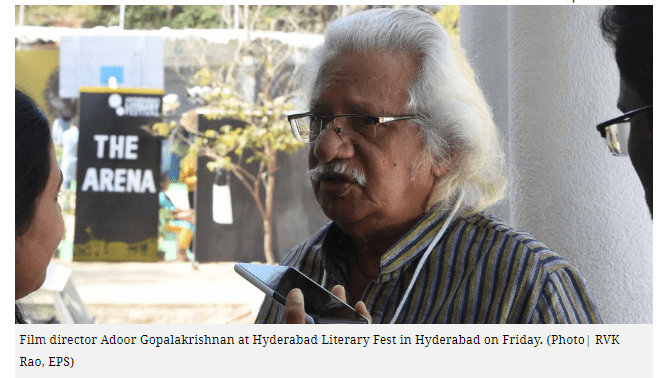 HYDERABAD: Adoor Gopalakrishnan, acclaimed film director credited for starting a new wave of Malayalam cinema in the ’70s, came down heavily on the current government while remarking that this is the worst time to be a film maker. The director took part in two sessions on the inaugural day of the three-day Hyderabad Literary Festival (HLF) at Vidyaranya School at Saifabad on Friday.

“The government is trying its best to stop filmmakers from making sensible cinema. How else can one explain the kind of jury that decides the national awards,” he said, while adding that the people who belong to a particular political party and have never seen even one good movie in their life are judging the movies.

He was in conversation with director Anish Kuruvilla in the morning session. Malayalam is the focus of HLF 2020 and the director shared his experiences and thoughts about Malayalam cinema.

He dismissed the concept of disclaimers in movies saying they only cause a hurdle in storytelling. “Now if I show a cat in a film, I need to tell them about the owner of the cat and if it was hurt. Same rules apply when we show women in movies. What else is there to show in a movie then,” he asked.

The National Award winning director also came down heavily on streaming of movies. “A purist, I believe a movie has to be enjoyed in the cinema theatre and it kills the charm when watched in any other  media,” he says. His candour and straight-forward statements won the audience who applauded his work and his thoughts.