‘These days, I do not write with the same degree of frankness as before’: Salma - gatewaylitfest.com 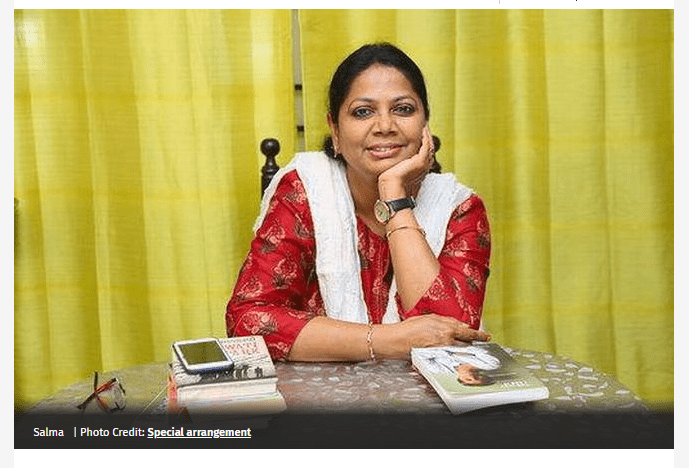 For someone who was pulled out of school before 15, subjected to house arrest and married off at 19, Rajathi Samsudeen a.k.a Salma has walked a long distance. A well-known name in Tamil literature today, Salma has two novels, three poetry collections, one short story collection and an anthology of essays to her credit. Her debut novel, Irandam Jamankalin Kathai (Hour Past Midnight), was longlisted for the DSC Prize and the Man Asian Prize 2010. Her 2016 novel, Manaamiyangal, was translated into English in 2020 as Women, Dreaming by feminist writer Meena Kandasamy.

Salma’s fiction is characterised by strong-willed women who are free in their imaginations despite being muzzled by patriarchy and religion in real life. Currently the State deputy secretary of the DMK’s women’s wing, Salma talks about her life and art in this interview. Excerpts:

Do you think your work has inspired women?

Although I have been writing steadily about issues and problems revolving around women, I have met only a few who are attracted to my writing. It does not seem like there has been any large-scale change. That may take some more time.

You have been oppressed as a teenager and in your early marital life. How empowered do you feel now?

Freedom is complicated. It is impossible for a woman to speak out about everything. Even male writers face problems on that front. But I have gained a measure of control over my life. I make my own decisions. My engagement in social activism or politics is a result of my choice.

You were threatened by conservatives for your books. Has it impacted your writing?

In the early days of my career, my novels and poems shocked society and consequently I faced strong opposition. Those who refused to see the rationale in my stories criticised me. These days, I do not write with the same degree of frankness as before because the right wing dominates the political discourse. Writers like Gauri Lankesh, Narendra Dabholkar have died because of their views while Perumal Murugan and others have faced death threats. It’s all due to a mindset that forbids speaking honestly.

What do you think about the translations of your books?

My novels have been translated into languages such as English, German, Galician, Marathi, and I am happy about it. But I cannot compare. The English translations have been very satisfactory: I am told that Meena Kandasamy and Kalyan Raman did an excellent job. Translations are giving me a wider audience.

What are you working on currently?

I have completed a short story collection, which has gone to press. It is getting delayed due to the pandemic but I expect it to be published soon. Currently, I am working on a novel that touches upon Islamophobia, love jihad and other issues which affect the normal lives of different communities living together in our country. I expect the novel to be published next year.

Who are your favourite authors?

I do read a lot — Arundhati Roy, Ismat Chughtai, Saadat Hasan Manto are some of my favourites. I am impressed by much of contemporary Tamil literature. I am also interested in world literature, especially works by Russian authors like Dostoevsky. I loved Tolstoy’s Anna Karenina.

How involved are you in social work and politics?

I am involved in supporting and seeking justice for people, especially women. I belong to a party that has its roots in social justice. I look forward to the DMK nominating me to contest an assembly seat in the next elections.

The interviewer is a Bengaluru-based independent journalist and writer.