The state has withdrawn all support of serious cinema: Adoor Gopalakrishnan - gatewaylitfest.com 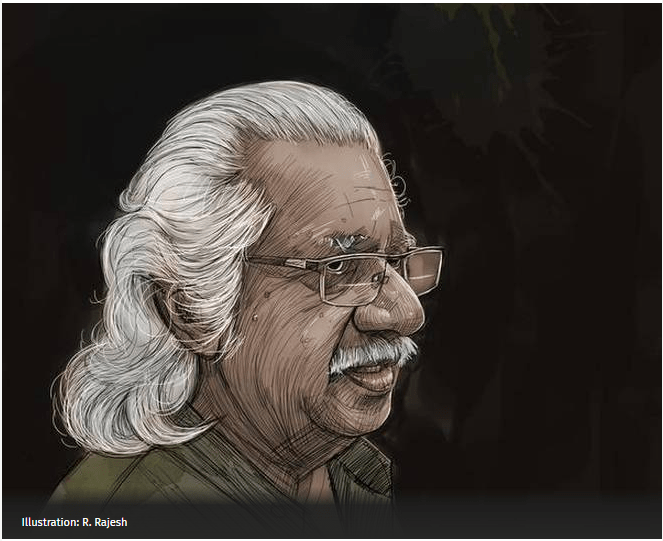 As he turns 80, the celebrated filmmaker talks of censorship and the dilution of cinema seen on a phone screen

Iconic filmmaker Adoor Gopalakrishnan turned 80 years on July 3. His oeuvre spans five decades in which he has created powerful cinema of great aesthetic vigour and political vision. He is also a pioneer of the film society movement, and has always championed the cause of art cinema in India. Excerpts from an interview:

How did you live through the past 15 months of the pandemic? What were you doing and thinking about?

As a citizen, I have been feeling guilty about having even the bare minimum comforts I am blessed with. My heart goes out to those innumerable families, the children and the sick fleeing cities like Delhi on foot to their distant homes. I have spent most of my time reading books and periodicals and doing a bit of writing (not any scripts as yet) on cinema. I’m also devoting a considerable amount of time to the affairs of the K.R. Narayanan National Institute of Visual Science & Arts as its chairman.

Was art a solace for you? If so, what kind of art?

One art form I find refuge in is Kathakali, but it has been more than a year since I could watch a performance and get completely immersed in it. Kathakali, as you know, is a highly stylised form of theatre and there is no attempt to reproduce reality anywhere in its presentation, whereas cinema relies basically on reality to narrate a story. This dichotomy or contradiction is interesting because I am very much involved in both, as a rasika of Kathakali and practitioner of cinema. My reading habits are also far from monocular.

If one looks at your body of work from Swayamvaram to Pinneyum and Sukhanthyam, there is an increasing sense of despair or loss of hope that becomes increasingly palpable in your last films. Has it got to do with an increasing disillusionment with the idea of India that your generation — the Gandhian/ Nehruvian generation — shared and believed in?

You said it. I have grown up with high ideals as evinced in Gandhi and Nehru’s vision and dreams of a nascent nation. The British had left behind a poor India. And its building up meant struggles and sacrifices. The people were taken into confidence in building up the edifice of a new democracy. Nehru’s India had placed humanism above everything else. In less than a decade, India had laid the foundations of industry, culture, arts, literature and practically every sphere of human activity anew. Poor but strong in convictions and confidence and armed with a firm faith in values, India came to be looked upon as a nation bound to achieve a lot more.

With the founding leaders gone and their idealism soon forgotten, the new breed of politicians has become corrupt and un-serving. In today’s India, I feel a pall of gloom and doom closing in. There is no realisation of the fact that in a democracy the ruling majority party should function and legislate with the consent and co-operation of the opposition. It is not surprising for the political and social mood of a period to be reflected in the works of an artist.

You pioneered Kerala’s film society movement to create a discerning audience for serious cinema. Today, when everything is freely available online, what should be the new role of film societies?

For some time now, I have been thinking that it was a little anachronistic to continue with the film societies in their old mode. Establishing art houses would be the right answer today. It should be possible for anyone who wishes to see a masterpiece on screen to walk down to an art cinema and watch it against a reasonably priced ticket. This will popularise off-beat cinema. There has to be a conscious effort on the part of the state to build and run such cinemas. The initiative cannot be expected from the private sector.

In the post-corona world, the fear of infection will loom large over everything, especially with regard to social congregations of any kind. Cinema at all stages demands the physical coming together of people to make it possible. So, what do you think will the cinema of the future look and feel like?

I am hoping things won’t be as dismal as they appear. I would rather the situation improved and things went back to normal. There may be small changes owing to the special situation.

Viewers increasingly prefer to watch films on their laptops or mobiles. Do you think such a shift from big to small screens, from public to personal viewing, will affect and mould filmmakers even at the stage of imagination?

Cinema cannot be appreciated on a mobile phone or even on your PC. There may be a few lasting converts from screen to PCs even at the end of the pandemic, whenever that is, but they cannot have the same impact as watching a film on the big screen in a darkened hall with images many times larger than life. The communal feeling of watching a film with like-minded people around oneself cannot be replicated. The size in which you see the visuals will affect you differently; the same is the case with sound. On a PC or mobile, you do not get to hear the highs and lows. Only the mid-level sounds reach the ears, and you are often guided only by the dialogue exchanged between characters. That is not the way to experience cinema.

What do you think about the state of serious cinema in India today? When theatres and television do not give even nominal space for it, what is the future of serious art practice, its sponsorship and audience?

This is a serious question. The state has withdrawn from all fronts in terms of promotion or support of serious cinema. In the state’s view, as can be understood from policies adopted from time to time, cinema is simply variety entertainment, a belief shared by the majority of the practitioners and the public too. Who will educate the state, which does not believe in consultation? The situation was not very different even half a century ago, but there were some rays of hope. That is gone now. Corporations set up by the government to nurture and promote quality cinema went the way of other state initiatives.

One major revolution that happened in cinema is the shift from analogue to digital technology. This has made filmmaking more affordable, easy and accessible, especially to youngsters. How do you look at this shift?

Technological change is part of a constant evolution of human inventiveness. It is true that cinema has been relieved of most of its cumbersome complexities of production. Digital technology has suddenly opened up new possibilities for the young and the upcoming generation. It is like the invention of the printing press, which took literacy to everyone far and wide. Image-making has been democratised, and changes in perception are bound to arrive with this. some for better and some for worse. An innate problem is the casualness with which some among the new generation are dealing with it. Cinema is an art form that is capable of meditation. We cannot afford to sacrifice it to expediency.

Malayalam cinema today is witnessing a sort of resurgence with a number of young filmmakers giving it a new look and feel. In contrast to the superstar narratives, these films deal with ordinary humans in mundane settings. How do you look at the new trend?

There are interesting filmmakers in the new generation. Happily, Malayalam cinema has started moving away from a state of stasis, where there was nothing new happening for a long time. Any deviation from the stereotype and the commonplace is welcome.

How do you look at the proposed amendments to the Cinematograph Act? Do you think in this age of the Internet, censorship is possible or necessary at all?

While censorship itself is against the very spirit of the Constitution, there is an ongoing mindless operation to make it more and more widespread. Preceding the present plan to amend the Cinematograph Act, what the government did was to surreptitiously disband the Film Certification Appellate Tribunal — the one and only institution where the filmmaker could make an appeal against strictures. Normally, the appellate authority would be constituted of members who are legal experts and film professionals. It would entertain complaints from film producers and pass judgment after due consideration. In this manner, genuine complainants would get relief from faulty impositions of the censor board.

Now, the government plans to re-censor the censored films. This is against all norms of democratic functioning of institutions. When a regime suspects its subjects beyond reasonable limits, it smacks of authoritarianism. Intimidation and the feeling of being smothered are not what we expect from an elected government.

The Kerala-based interviewer is an award-winning critic, curator, director and translator.