The lost art of handwriting - gatewaylitfest.com Revival mode: Through workshops and cultural festivals, Project Kitabat is showcasing the old practice of calligraphy as contemporary art

* Qamar Dagar freely allows the influences of Devanagari and Perso-Arabic scripts in her work and innovates with colours, lines, letters and strokes, making the art form her own

* “There are a lot of clichés about calligraphy, plenty of pre-conceived ideas — that calligraphy is religious and can only be done in some scripts etc. But that’s not true at all”

When Qamar Dagar was a child, her father brought home a book on Arabic calligraphy by the legendary Iraqi calligrapher and painter Hassan Massoudy. She was fascinated by the stunning imagery of the book and knew, almost instantly, that she had fallen in love with the intricate style of lettering.

Dagar, who belongs to a family of musicians, began learning calligraphy at a tender age from a skilled Arabic master calligrapher, Hazrat Amin Abdullah Khan, who taught her that at the core of the beauty was the simplicity of the art. Today, she freely allows the influences of Devanagari and Perso-Arabic scripts in her work and innovates with colours, lines, letters and strokes, making the art form her own. An award-winning pictorial calligrapher — a recipient of the government’s Nari Shakti Puraskar — Delhi-based Dagar’s works are displayed in private collections in India and abroad.

In 2011, she founded the Qalamkaari Creative Calligraphy Trust in the capital which works to revive the lost art of calligraphy in various scripts. Today, she is also the mentor to several students of Urdu calligraphy through an initiative named Project Kitabat, that’s about to complete three years. 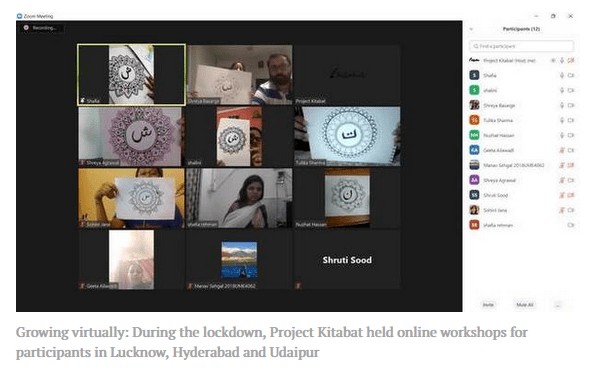 Kickstarted by the Netaji Subhas University of Technology, Delhi University, Project Kitabat took wing in 2018 when a team of students came across one of the last practitioners of the art in Old Delhi’s Urdu Bazaar. “Mohammad Ghalib brought the hardships of the art form to the fore. With his last standing makeshift shop, he showed the state kitabat was in. The helpless situation of the practitioners or katibs is what Project Kitabat recognised and saw the need to preserve and foster,” says Sonal Sachdeva, a member from the core team of Project Kitabat. Ghalib and his shop are still there in Urdu Bazaar but he primarily sells books.

Calligraphy or the visual art of lettering dates back to several centuries and is counted as one of India’s oldest cultural heritages, one that peaked during the Mughal era. The artistic practice of handwriting using Urdu and Arabic alphabet or the alphabet derived from it is called kitabat and was used extensively once. From penning farmaans or official decrees from the emperor to writing manuscripts and books, calligraphers were integral to everyday communication. The profession was passed on from generation to generation and history was written in between the stunning strokes of the katibs or calligraphers.

But like a beautiful rose saved in the pages of an old book, the once in demand art form started to languish with digitisation and modernisation. Till the 1980s, calligraphers were hired by companies to design signages and magazines and book covers. Steadily easily printable 3D work rendered most of the katibs jobless. A few like Ghalib in Urdu Bazaar are holding on to calligraphy come what may.

But a revival by the initiative has not just made strides but also shows great promise today. Dagar works with a family of 25 katibs. The project has other notable calligraphers such as National Award winner Anis Siddiqui, Afreen Khan who does calligraphy on feathers, Shuaib Shamshari who does calligraphy on leaves, Shafia Rehman known for her fusion of mandala art and Urdu calligraphy and many more.

One can learn this art form at any age or at any place, Dagar points out. “There are a lot of clichés about calligraphy, plenty of pre-conceived ideas — that calligraphy is religious and can only be done in some scripts, etc. But that’s not true at all. It’s an expression of art and we must make people believe that what they are creating is beautiful,” she says. Mistakes are part of the journey and that is where a guiding force becomes important, she believes.

The students of the project agree. “To become a katib, one needs to know Urdu because kitabat stands for Urdu and Arabic calligraphy. But that isn’t the prerequisite for any participant willing to learn this art form through our initiative. Anyone who understands the value and the amount of hard work involved in making this beautiful art form in the era of digitalisation is the right person for this project. Our success has resulted in the project being able to support its katibs. It has also helped encourage many to pursue this as a career,” Sachdeva says. She points out that calligraphers can be placed as designers across sectors such as architecture, publishing and merchandise and as visual creators for brands.

While Project Kitabat attracts people who know Urdu as well as those who appreciate its beauty, the team realised that it could actually appeal to a wider range of people. For this, they collaborated with several cultural festivals and retail outlets in the country to encourage people to engage with their art.

“People from outside India who have no clue about the art form and many who don’t know how to read and write Urdu liked and bought our products such as home décor and clothing at various heritage festivals. The courses and workshops we conduct also witness a variety of audience, who don’t know Urdu but are willing to learn it in the process of learning Kitabat. Our online workshops and courses see people from all over the country and abroad dive into the practice,” Sachdeva says.

That said, while India is culturally so rich, practising art doesn’t usually get its due. That it wont pay bills is how the thought goes. “It should be called as any other calling in life. Technology has been a boon but its flipside is that the human element suffers. So artists will always be important in the grand scheme of things,” says Dagar.

Afreen Khan, the first in her family in Rampur, UP, to pursue a profession in calligraphy, agrees. “I started doing calligraphy on feathers and it was a very new concept. I exhibited in 2017 for the first time and found admiration for my art. Today, online and offline events by Kitabat are helping artists find their voice. So the best thing to do is to acknowledge your passion and go ahead. Just remember to never compare likes on social media. Compare your own work done today to that done a year ago,” Khan says.

The art is practised traditionally with a qalam or a pen made of dry bamboo. It is the edge of the pen that allows the performance of calligraphy to be in full movement on the paper. Other types of pens used by katibs today are Celi pens, Handam pens, metallic tip pens. They are also continuously experimenting with the base, using feathers, cloth, handmade paper, wood and even metal. “The different scripts of Urdu and Arabic Calligraphy are Thuluth, Naksh, Nastaleeq, Kufic and Diwani — all of which a katib can write by using ink with varied intensities and textures, creating smooth movement in letterforms,” Sachdeva says. 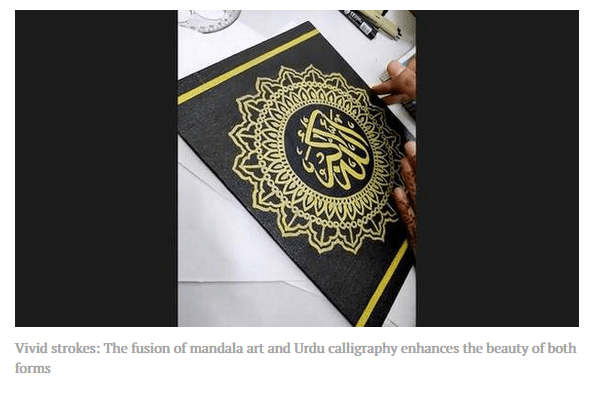 Now, efforts are being made to see the forgotten art as contemporary. “Art that happens in a certain era is a mirror to the times. If we indulge in fusion now, it is how this era reflects in our art. What is contemporary now will be traditional tomorrow,” explains Dagar. To that effect, mandala art, that has recently gained immense popularity, is being fused with Urdu calligraphy in some of the workshops the project is conducting.

“In Hindu and Buddhist cultures, mandalas hold a symbolic and meditative meaning beyond their vibrant appearance. Designing your own mandalas can be both inspirational and therapeutic. The fusion of mandala art and Urdu calligraphy enhances the beauty of both while helping modernise the latter. The fusion also forms a standalone art form,” explains Sachdeva. The project has collaborated with a Texas-based online marketplace for hobby classes and workshops, and received excellent results.

With the pandemic, the small world of kitabat, like much else, moved online. “We conducted numerous events online in 2020 from online calligraphy challenges to exhibitions. We conducted regular online classes and even launched our courses on online platforms like Udemy. We expanded to new cities like Lucknow, Hyderabad, and Udaipur and managed to build a strong base there,” Sachdeva says.

Their steady work has been recognised at both national and international levels with Prime Minister Naremdra Modi lauding their artists and attempts at revival at Hunar Haat (organised under the ministry of minority affairs). Today, the people of the project are convinced that through a number of ways, the old art form will survive and thrive.

“An online kitabat store is underway where products such as calligraphy on wall plates, keychains, home décor and clothing items made by our artists will be up for sale. Partnering with international organisations, setting up a kitabat retail store, starting online Urdu Calligraphy courses, organising training programmes for katibs, conducting regular online workshops and calligraphy challenges will take us forward,” she explains.