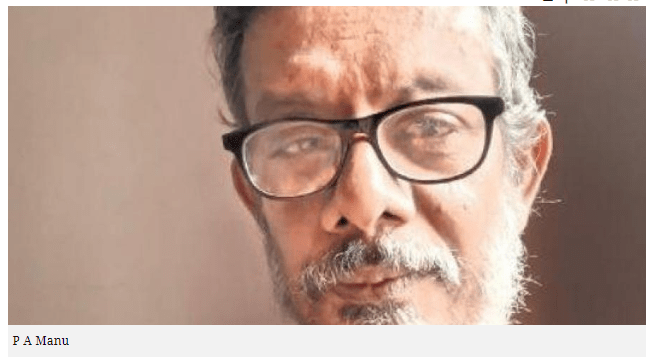 KOCHI: PA Manu, the creator of Munroe Thuruthu which delicately portrayed a few people’s search for space, is back with a short film, a timely one that is. Titled ‘Error’, the 12-minute film narrates the travails of three characters caught in between reality and virtual reality during the Covid-induced lockdown period.Manu has reunited with Indrans and Abhija Sivakala, who both delivered fine performances in Munroe Thuruthu, while Chinnu Kuruvila is the third actor.

The film’s shoot was held at three different locations—Thiruvananthapuram, Bengaluru and Mavelikkara—with Manu directing the units from his house in Kottarakkara through videoconferencing.“Error is about virtual reality vs reality. Rather a peculiar feeling of reality one gets after spending too much time on smartphone and laptop. Though that reality stands far away from truth, the lockdown—the lack of people’s mingling and social distancing forced by it—only helped the feeling grow. Without knowing much about coronavirus, we often laughed at or blamed others.

No one, be it the common man, capitalists, priests, bhakts, judges or rulers, was free from the confusion. Error looks at that inefficiency. It’s a fiction, one that can fall under the category of a thriller,” Manu told TNIE. “After Munroe Thuruthu, I was engaged in the planning of another work titled Hakim Moves Himalayas. It was conceived as a different type of movie and I had been to the mountains as part of it. But then I faced a medical condition and got bedridden. That way, I was in self-containment much before the coronavirus outbreak. Ever since I started feeling better, I remained busy writing some other scripts. It was then the idea of Error came to my mind and I thought the short format, which I have always loved, would suit it better,” said Manu.

Prathap Nair, who wielded the camera for Munroe Thuruth filmed the portions of Indrans, who plays the role of a Hindi-speaking house owner which according to Manu was a challenging one. Sreejith Hari shot the portions of Abhija in Bangalore while Chinnu, who is also a cinematorapher, recorded her scenes in Mavelikkara with the help of a friend. Pinto Varkey did the editing sitting in Ernakulam, Don Vincent did soundscaping in Aluva, Sreenu Romy the graphics in Mumbai and Anasuya humming-recording in Kollam.

“With the director not on location, we had to go for many takes thus making Pinto’s job tougher. The team members had to stay awake till late into the night and many times until morning. The effort everybody put in was amazing, with me sitting in my chair and communicating mostly through WhatsApp messages and calls. The experience was unique and the rest is for the viewers to decide,” said Manu.