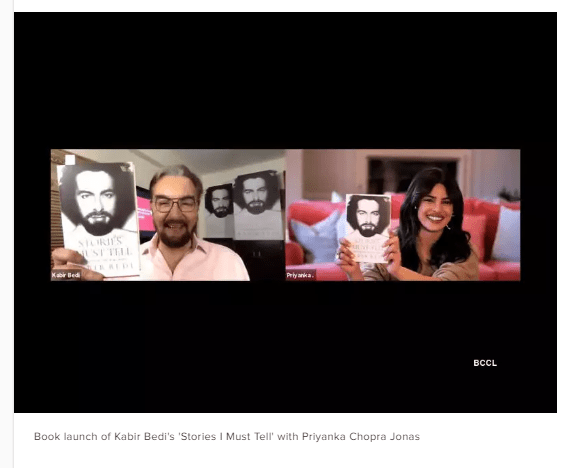 Iconic actor Kabir Bedi’s memoir ‘Stories I Must Tell: The Emotional Life of an Actor’ was launched in an online event by international star Piryanka Chopra Jonas on April 19, 2021.

In ‘Stories I Must Tell: The Emotional Life of an Actor’ Kabir shares his journey and life experiences as an actor, whose illustrious career spans over three continents and across three mediums: films, TV and theatre. Apart from his professional journey, Kabir also opens up about his personal life, his tumultuous relationships, his setbacks in life and exciting times.

The book’s cover was officially launched earlier by Kabir and Salman Khan on April 8. Interestingly, the cover photo was taken by Terry O’Neil, Elton John’s photographer, way back in the early 1970s.

Talking about the feedback that he’s been getting about the book, Kabir said, “I have been getting wonderful feedback and it is very gratifying… But I did notice that in the media they tend to focus a lot on the Parveen Babi and Protima Bedi angles because that’s where they figured familiar names and they would talk about it. And I felt that yes that’s true, I have written about it, but they are just two chapters in my book. I have many chapters and many stories in my book.”

During the official book launch with the author, Priyanka Chopra Jonas revealed that her mother Madhu Chopra is a huge fan of Kabir Bedi. “My mom is the hugest Kabir Bedi fan since she was 19 years old. When I signed-up ‘Hero’ she wasn’t excited about the fact that I signed my first film with Sunny Deol, Anil Sharma and others. But she was most excited about the fact that I was working with you!,” she told Bedi.

Praising the book, Priyanka said, “You have had such an incredibly prolific life. I agree with the book’s title that these are stories you must tell! You have experienced so much of life- both professional and personal; there is so much that we can learn through it. You really paved the way for people like me (from Bollywood to Hollywood).”

The book launch was followed by an interesting conversation between the two actors, wherein Kabir shared a series of fascinating anecdotes from his book and life. Reminiscing about how he got his roles in Hollywood, Kabir shared, “You are kind of right– I was probably the first Bollywood actor who made a career in Hollywood… By that time, I had stardom in Europe behind me. But when I came to Hollywood, as a new-comer, I thought they would be impressed by that. But no, they didn’t care. I bought a house and Mercedes; they didn’t care. I had William Morris working for me; not a dent. So the problem was that in those days Hollywood just wasn’t writing roles for Indians or Asians in general. And when they did have a role for Asians, they had no hesitation in painting a white actor brown. So I told my agent that ‘cast me for anything that is foreign looking in Hollywood’, and that’s how I got my roles! In the ‘James Bond’ film I was actually cast as a Indian. But in ‘Bold and Beautiful’, I played a Morrocan prince… In those days Ben Kingsley had to change his name from Krishna Bhanji to get roles. Today a Priyanka Chopra doesn’t have to change her name to get success in America.”

On this Priyanka shared her own experience of moving from Bollywood to Hollywood. She said, “I didn’t have to change my name but I had to teach people how to say my name. I had to be ethinically ambigious to a certain extend to be able to get mainstremam roles…”

Kabir also talked about his interview with The Beatles— which was a turning point in his career which took him from All India Radio in Delhi, to the world of advertising and theatre in Mumbai, and finally into movies. “My book is an emotional journey of my making, breaking and re-making as a man,” he said.

‘Stories I Must Tell: The Emotional Life of an Actor’ is published by Westland Publications.