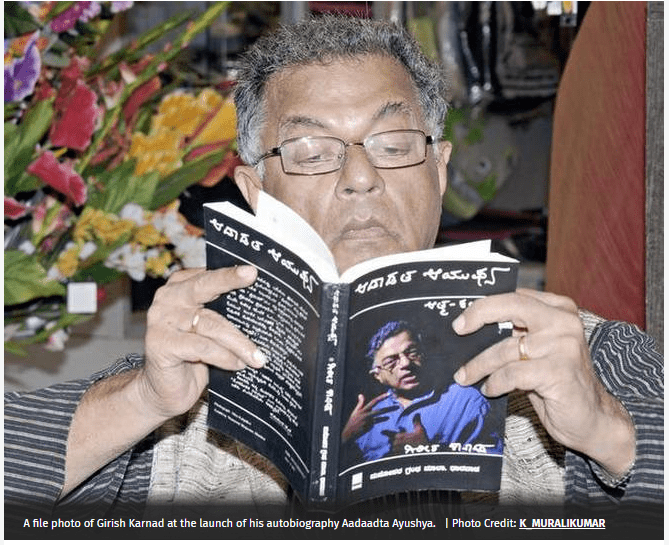 To pay tributes to playwright and Jnanpith awardee Girish Karnad on his death anniversary on June 10, a Dharwad-based theatre group will attempt an unique initiative. ‘Abhinaya Bharati’ will hold an online reading of the autobiography of Karnad in Kannada Aadaadta Ayushya (Life moves on while playing).

The session scheduled to begin from 6 a.m. on June 10 will have participants joining in from the U.S., United Kingdom, and Germany apart from leading personalities from across Karnataka.

Preparatory reading sessions have already been held and the participants will read 327 pages of the life of the multifaceted personality. The memoir is divided into 11 chapters named after places where Karnad spent his life. The relay reading session on Abhinaya Bharati’s Facebook page will begin at 6 a.m. It is likely to conclude around 1 a.m. on June 11.

“We have given each participant 20 minutes to read an average of six pages. The starting line and ending line of their reading has been sent to them and as one finishes the next one will continue,” Arvind Kulkarni, president of Abhinaya Bharati told The Hindu.

Having conducted various theatre-related programmes on virtual platforms during the lockdown, the theatre group began the preparations last month. “After initial reluctance and doubts over its feasibility, many chipped in and now we have 55 readers who will read the autobiography one after the other,” he said.

Kannada film director and theatre personalities T.S. Nagabharana, Sripati Manjanbail, Suma Narasimhan will be among the participants. Vallish Shastri, Pawan Janakiram, Ravi Harapanahalli, Ballal, Kavya Kadame and others from U.S., Jai Hanumanthgad, Gauri Prasanna from U.K. and Dattatreya Hegde from Germany are among the readers.

The group is well aware of the technical issues that may crop up during the virtual programme. “We are prepared for it. If at all there is any hiccup, one of the coordinators will chip in and continue the reading,” Mr. Kulkarni, who is keen on giving a befitting tribute to Karnad, said.