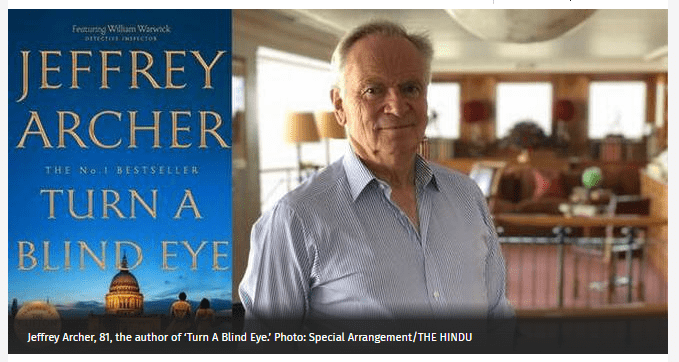 Novelist Jeffrey Archer has been busy during the lockdown, managing to advance his writing schedule by penning two books instead of the usual one this year.

Published in 97 countries and over 30 languages, Archer is a household name with fiction lovers, with a career trajectory that covers politics, publishing, theatre and sport.

The double-duty during lockdown is no mean achievement, because the 81-year-old author (whose official title as non-affiliated life peer in the UK since 1994 is Lord Archer of Weston-Super-Mare), still writes the first draft of his stories by hand, with an ink pen, that he corrects with pencil before it is typed for submission.

“I have always written in longhand, and I like to do at least 14 drafts before [the book] reaches the public. It’s much better that way, than doing one draft and wishing one had worked harder because the readers aren’t happy. Once I’ve finished, I know it’s the best I can do. But I don’t hand [the manuscript] in until I feel I’ve reached that stage,” he tells MetroPlus in an email interview.

Staying home during lockdown, says the writer, helped him to focus. “I was thankful to be fully occupied doing what I do, rather than watching afternoon television,” he says.

In recent weeks, Archer has been busy with the promotions (mostly digital) of Turn A Blind Eye, third in the series featuring William Warwick, the detective whose character is a spin-off from The Clifton Chronicles. It was launched globally in April. Readers in India can tune into an online book launch ceremony of Turn A Blind Eye being organised by the non-profit Prabha Khaitan Foundation, Kolkata on June 12.*

Appearing first as a (fictional) sleuth in the novels of Harry Clifton, the protagonist of The Clifton Chronicles, (2011-’17) William is the son of a distinguished judge, Sir Julian Warwick. He chooses not to follow his father, as his sister Grace has, into the legal profession, and instead works as a police detective.

The William Warwick series started in 2019 with Nothing Ventured, followed by Hidden in Plain Sight (2020) and now Turn A Blind Eye.

In the latest book, which is set in 1987, Warwick, now promoted to Detective Inspector of the Metropolitan Police Force, leads an in-house team investigating fellow officer Jerry Summers for corruption, while appearing as a Crown witness in the prosecution conducted by Sir Julian and Grace, of druglord Assem Rashidi.

There’s a twist typical of an Archer plot: Nicola Bailey, a key member of Warwick’s team, complicates matters by falling in love with Summers.

His wife Beth’s renewed acquaintance with Christina, the widow of Miles Faulkner, an enemy from his past, may also help him to close in on a clever art forgery caper…

Turn A Blind Eye is not a simple police procedural, though, because when the plot is not chasing law-breakers, it makes space for word play, etymology and art history into the narrative.

So does Archer find himself torn between his role as bestselling author and storyteller? “The truth is that I look upon myself as a storyteller rather than a writer, and I do try and include in each book my knowledge of art, politics, auctioneering and sport,” says Archer.

In the comfortably low-tech atmosphere of the 1980s, readers can follow the book’s characters as they slip in and out of bus stops and public phone booths while shadowing suspects. Though occasionally given to narrative licence, the court and art auction scenes are etched in an almost cinematic style.

“Turn A Blind Eye is not a book about cops and robbers. It is the story of a young policeman and his career, rising from constable on the beat to commissioner of the Metropolitan Police,” Archer.

But the writer has made allowances for increasing the role of technology in law enforcement and crime detection as the novels progress.

“The William Warwick novels will be eight books, covering eight different subjects (so far, art theft, drugs, murder, police corruption), while William holds eight different ranks in the Metropolitan Police, and yes, I can confirm that in the next book, Over My Dead Body, which will be published in October, he does have a mobile phone!” writes Archer.

Though it all looks neatly plotted out to the reader, the author says that at times, the players decide the direction of the story. “Although I will have sketched out an outline of the next book I’m about to write, when I begin, I often have no idea of where the characters will lead me, and when it comes to an end, I’m sad rather than happy,” he writes.

Archer’s characterisation skills stand out in Turn A Blind Eye, especially with the women who turn up on both sides of the law. Whether it is unplanned parenthood, formalising a same sex relationship, or getting even with cheating lovers, the female characters have a lot of agency over their lives and gender identities in the novel.

There is some real-life inspiration for this, says Archer.

“My mother took her degree at the age of 53. My wife Mary taught at both Oxford and Cambridge before becoming Chair first of Addenbrookes Hospital and then of the Science Museum, and I had the privilege of working with [Prime Minister] Margaret Thatcher for 11 years. I admire and like strong women, and they play a major role in my books,” he writes.

*The book launch event can be watched online on June 12, 2021 on Facebook Live at 7pm (IST) and 2.30pm (GST); https://www.facebook.com/PrabhaKhaitanFoundation/