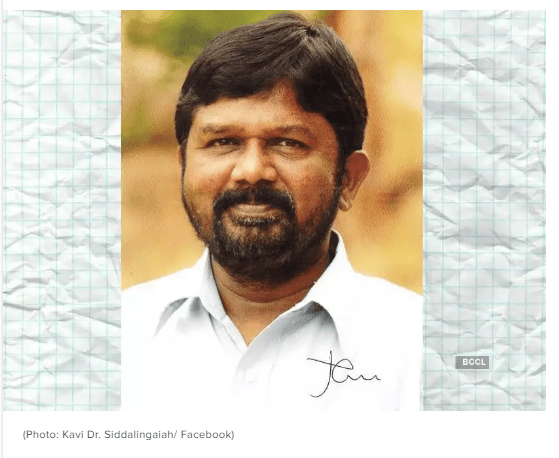 Karnataka’s noted Kannada Dalit poet and activist Siddalingaiah died due to Covid-related complications at a private hospital in the city on June 11. He was 67.

“Siddalingaiah, who tested positive on May 2, was admitted to Manipal Hospital on May 4 for severe Covid pneumonia with multi-organ failure. He succumbed to the disease despite best efforts by doctors with life support system,” said the hospital in a statement here.

The renowned poet and former lawmaker leaves behind a widow, a son and a daughter.

Born on February 3, 1954 at Magadi in Ramanagara district near Bengaluru, Siddalingaiah launched the Dalit-Bandaya movement in Kannada and pioneered the genre of Dalit writing in Kannada literature.

Siddalingaiah is credited with initiating the Dalit-Bandaya movement in Kannada and starting the genre of Dalit writing in Kannada literature.

A co-founder of the Dalit Sangharsha Samiti in the southern state, Siddalingaiah was head of the Kannada department in Bangalore University and chairman of the Kannada Development Authority in 2006. He was also a member of the state assembly and council for two terms each in the 1980s and 1990s.

According to family sources, Siddalingaiah served as chairman of the Kannada Development Authority and Kannada Book Authority.

A recipient of several awards, including Pampa and Rajyotsava from the state government, Siddalingaiah was the voice of Dalits in the state, which found echo in his poems and playwrights.

He also published autobiography ‘Ooru Keri’ in Kannada, which was translated into English as “A Word With You, World” by S.R. Ramakrishna.

Mourning his death, state Chief Minister B.S. Yediyuyrappa said Siddalingaiah had put the pain of Dalits in the form of words and created awareness about Dalit issues in the southern state.

“In his death, we have lost a great writer with social concern. He strived to uplift the oppressed classes. I pray to Almighty to bless his soul and give strength to his bereaved family to bear the grievous loss,” said the chief minister in a statement here.

Several leaders, writers and followers also mourned his death and expressed condolences to the bereaved family.

Noted historian Ramachandra Guha said in a tweet “Siddalingaiah was a warm and compassionate human being, with a delightful sense of humour.”

“Deeply saddened to hear of the passing of the distinguished Kannada poet Siddalingaiah, due to Covid-related complications. His autobiography, which is available in English too, is a literary classic,” Guha tweeted.