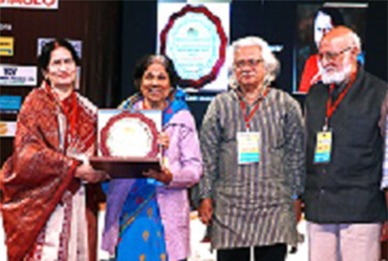 The great Marathi writer Urmila is known for her frank and direct style of writing, which reflects her own experiences of the myriad difficulties of being a woman and that, too,a Dalit.

Her 2003 autobiography Aaidan (The Weave of My Life: A Dalit Woman’s Memoirs) is a poignant story of her own life as the child of a Dalit family—that began in a little hamlet in the Konkan region of Maharashtra. Born in into a Hindu Mahar family, her family later adopted Buddhism. Her autobiography continues to touch the hearts of all those who love Marathi literature.

Urmila has learned early on in life the meaning of her subordination as a woman and also as a Dalit. This has made her understand the need to be self-confident and courageous to overcome these discriminations. And this made her stand in good stead in her attempts to break the barriers and reach the star.

A prolific writer, Urmila has 10 published works, including three short-story collections. Some of her selected works are translated into English as ‘Mother Wit’ by Veena Deo of Hamline University in the US.

Some of her leading titles include the short-story collection Sahave Bot (The Sixth Finger, 1988); Udan (a translation of Hindi stories depicting Buddhist philosophy into Marathi, 1989); Amhihi Itihas Ghadavla (We also Made History, 1989) which is a book on women’s contribution to the Ambedkar movement;the a short-story collection Chauthi Bhint’ (The Fourth Wall, 1990); the travelogue Mauritius Ek Pravas, 1994; two one-act plays Don Ekankika, 1998; and the short-story collection Hatcha Ek (Carry Over One, 2004) to name a few.Almost all her short-stories are available in Hindi, English, Urdu and Kannada.

Some of the major honours she has received include the Sahitya Sanskriti Mandal Maharashtra Rajya Puraskar, Asmitadarsh Puraskar;ShakuntalaNeme Puraskar; VC Gujar Puraskar; Priyadarshani Academy Award for her autobiography Aydaan in 2004; MatoshriBhimabaiAmbedkar Puraskar and Dalit Mitra Award.

Her short-story collection Kavachis in the BA syllabus of the SNDT University, Mumbai, while the autobiography Aydaanis in the syllabus of University of Mumbai’s MA course since 2006 and also of the University of Nandedsince 2010. It’s also incorporated in the library of Columbia University in the US.

A Masters in Marathi literature, she retired as an employee of the state Public Works Department and now lives in the northern suburb of Kandivli.