Farewell to an extraordinary writer - gatewaylitfest.com 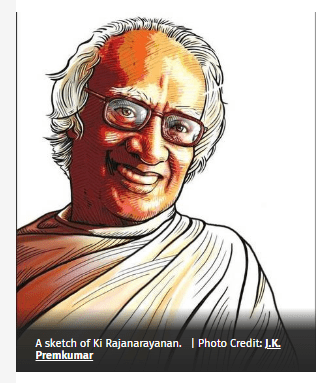 Six months ago, HarperCollins published a collection of translated stories I had wanted to see in print for a little over five years. To my amazement, not a single copy of Karisal Kathaigal (1984) edited by Ki Rajanarayanan was available. When I asked around I was told, “Don’t bother with something so outdated. It isn’t even in print.” I persisted and felt lucky when Cho Dharuman sent me a first edition of the book which I photocopied.

When Padma Narayanan said she knew Ki Ra well enough to ask him about the collection, I felt fate had opened a window. Ki Ra said that he had made changes in the 1991 edition and there began another steeple chase as we looked for the second edition also, by now, nearly extinct.

I persisted as did Padma. In 2015, she began translating the 21 stories and finished some time in 2017. Anyone who has worked with books will know that plans fall off the table as often as they go through. There began a leisurely to and fro between us as I fell to editing the stories which, partly due to their size and partly because I had to do a range of languages, endured too long a wait at the gates of the Oxford University Press. Fortunately when the Tamil Nadu Textbook Corporation (TNTB) opened its translation project with private publishers in 2019, HarperCollins accepted the script.

Collecting permissions is always a challenge. After letters and numerous phone calls via the benevolence of friends and intermediaries who I’m sure viewed me as a nuisance, eventually T.S. Saravanan, Deputy Director, TNTB, and I set off on March 10, 2019 to collect Ki Ra’s signature for HarperCollins. We were met at the border of Pondicherry and guided to Ki Ra’s austere little house by Ilavenil whom the writer viewed with as much favour as he would a son.

The great writer, by then well into his 90s, was in an expansive mood as his family served coffee. He signed with a flourish and began talking about people he knew (most memorably a halwa specialist who never made more than a specified number of packets of the sweet and only once a week though he might have enriched himself several times over if he had wanted to) and the Madras he remembered. He was very entertaining and though we had planned to return by a certain hour, it was difficult to leave when Ki Ra was obviously enjoying himself. He made no reference to the proposed book except to ask just once, “Will it really happen?” He seemed happy that the book had been identified by the TNTB, and said about the writers in the collection, “They are like my children.” Our second visit, two years later, also in March, was to hand over the handsome hardback and paperback volumes. By then Ki Ra was very ill but his eyes glittered as he smiled happily and posed with the book and copies of media reports about Along with the Sun. “What is the price of the book,” he asked, adding that a book was a book only between hard covers.

Ki Rajanarayanan did not win the many awards he might have but he truly lived along with the sun.