This book is quite unlike any I have read in recent times. Though, of course, the river as a metaphor for ceaselessly flowing time as also a cradle of civilisation is not a new literary device.

There have been books written on a grand, epic scale about peoples and cultures linked to rivers — such as Mikhail Sholokhov’s And Quiet Flows the Don or Qurratulain Hyder’s Aag Ka Darya (The River of Fire) — and about journeys from one river to another signifying journeys across civilisations, such as Conrad’s Heart of Darkness. But none can match the scale and magnitude, the erudition and fine detail, the sheer sweep of terrain and ideas of Rahul Sankrityayan’s Hindi classic Volga se Ganga.

Born Kedarnath Pandey in a modest home in Azamgarh, Sankrityayan took the name by which he is known when he embraced Buddhism in Sri Lanka after a brief dalliance with the Arya Samaj. Forever the traveller (he liked to use the Hindi word ghumakkar), he journeyed across vast expanses of lands and civilisations, imbibing new ideas and philosophies, translating, writing memoirs, philosophical treatises, biographies, fiction, even science fiction.

Written during 1940-42 — by when he had been sufficiently impressed by Marxist ideals to join the Communist Party of India and was taking a brief, albeit forced, respite from his travels, interned as he was first at Hazaribagh Jail and then at Deoli by the British government — Volga se Ganga became an instant bestseller and was soon translated into several languages. All of Sankrityayan’s vast and varied reading over the years, his prodigious recall of names and places and his phenomenal imagination come together in this book.

Spanning 8,000 years of human history, it takes the longue durée approach to ‘narrativising’ history. The waves of transcontinental 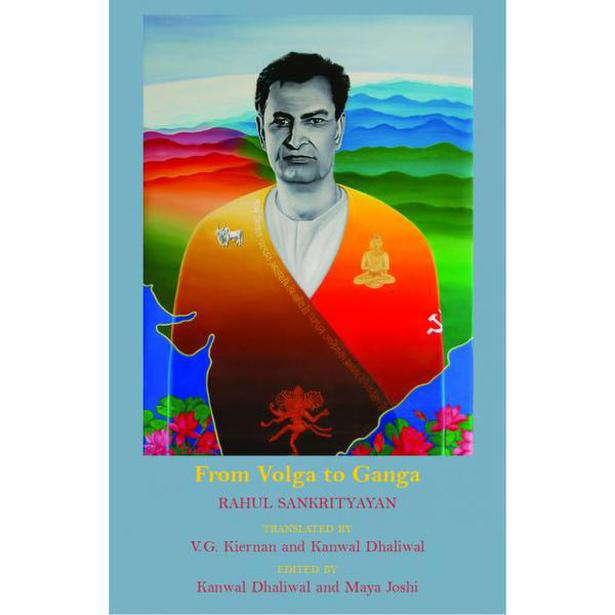 migration from the Eurasian landmass, from the Volga and the Oxus to the Indus, and subsequently the Ganga, as it travels across the breadth of the Indian subcontinent to meet the sea, are recorded in the form of 20 stories. Each story is named after a central character signifying an era.

The first story is located on the banks of the Upper Volga in 6,000 BCE, some 360 generations ago, when the survival of the fittest meant a mother drowning her daughter in a bid to retain power within her tribe. The last, dated 1942, is about Sumer, the son of a domestic worker, who sacrifices his life as a fighter pilot in the war of empires.

And so we travel down the river of time, holding the author’s hand, as he paints a panoramic view of history which is also rich in small details and wondrous sights, sounds, smells. Some characters are known to us through history books, others find mention in the Vedas, Upanishads and Buddhist treatises; but many are imaginary characters though they are perfectly rooted in their time and place. Not stories in the conventional sense, what emerges in these pages is a chronological series of vignettes of a recreated past.

Always a rationalist, Sankrityayan subjects all received knowledge to rigorous scrutiny, though it is distinctly coloured by his Marxist worldview. He talks of the breaking up of simple Aryan societies into families, the division between ‘high’ and ‘low’, ruler and the ruled, creation of organised religions, emergence of the varna system, delegation of women to an inferior position and, worst of all, the practice of slavery. The first milestone among the Vedic Aryans marking the emergence of a new order is when chiefs, kings or priests start living on the “labour of others without working themselves”. In ‘Pravahan’, located in 700 BCE, “ordinary people have been reduced to indigence” because of men who “play upon the pauperised masses — craftsmen, peasants and slaves” by telling them stories about karma and rebirth.

The English translation by V.G. Kiernan (first published in 1946) is built upon by Kanwal Dhaliwal. Maya Joshi’s excellent introduction and notes provide a valuable context for the modern reader possibly unaware of the author’s formidable reputation as a polymath and polyglot. So do the two fine essays by the Buddhist monk Bhadant Anand Kausalyayan and Comrade S.A. Dange, each in his own way providing a unique lens to view Mahapandit Rahul Sankrityayan. “I am large, I contain multitudes,” said Walt Whitman. It could well have been said of Sankrityayan. And of India.

The reviewer is a writer, translator and literary historian.