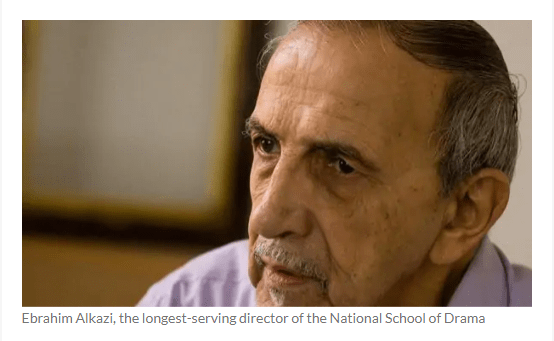 A prolific artist, an institution builder and a giving teacher, Ebrahim Alkazi is credited with changing the lexicon of Indian theatre

Ebrahim Alkazi, the doyen of Indian theatre, passed away in Delhi on 4 August at the age of 95. As the news emerged, tributes poured in from actors like Nawazuddin Siddiqui. “The magician who nurtured many greats of theatre,” the actor tweeted. “A colossus,” is how Anuradha Kapur, a veteran theatre practitioner and former director of the National School of Drama (NSD) describes Alkazi. “There is hardly anyone in modern Indian theatre, who has not been touched by him.” The longest-serving director of the NSD, Alkazi mentored the likes of Naseeruddin Shah, Sudha Shivpuri, Om Puri, Rohini Hattangadi, B.V. Karanth, and more, who went on to play a dominant role in theatre, films and television. “An institution builder par excellence, he changed the language of modern Indian theatre,” adds Kapur. Noted actor Sushma Seth calls him the “undisputed patriarch of Indian theatre who impacted its aesthetics, growth and stature.”

Alkazi hailed from an Arab family, with a keen interest in arts. When he came to Mumbai from Pune to attend university, he met Sultan “Bobby” Padamsee—Alyque Padamsee’s elder brother—and became involved in his Theatre Group. The set that Alkazi belonged to embodied the spirit of a nation on the cusp of independence. There was a constant dialogue and cross pollination of ideas between visual and performance artists. 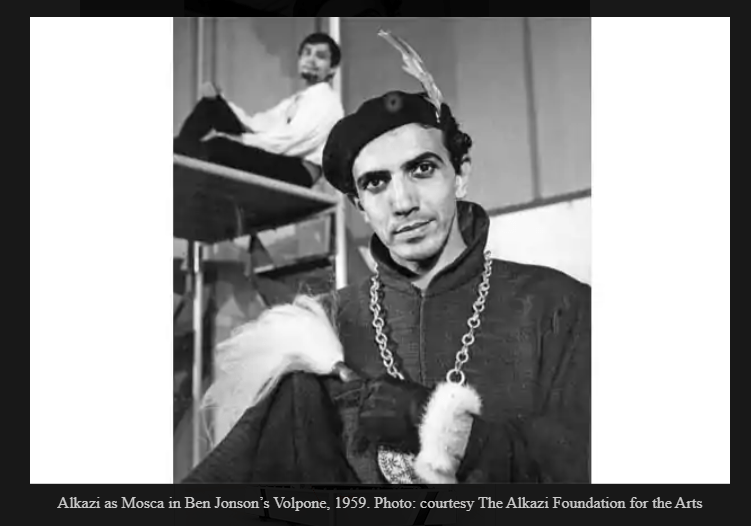 In 1948, he headed to England to study at the Royal Academy of Dramatic Art. Even though he won laurels for his work there, Alkazi returned to Mumbai, infused with a new zeal to do a different kind of theatre. “He was looking into the future. He wanted to do something meaningful,” mentioned Amal Allana, his daughter and noted theatre personality, in a 2015-interview to Elizabeth Kuruvilla for the Mint Lounge. In the same piece, Kuruvilla goes on to describe the school that he set up at the newly-created Bhulabhai Desai Memorial Institute—where artists such as M.F. Husain, Tyeb Mehta and Akbar Padamsee too had rented studio spaces. And thus began his association with members of the Progressive Artists Group.

Alkazi was already thinking of ways of revitalising theatre education when he was invited to head the NSD in Delhi, a city that he referred to as a “cultural desert” at the time. “I never had the privilege of being his student but several of my friends were. And I have always heard from them about how he was such a giving teacher,” says Kapur.

Noted theatre director, Neelam Mansingh Chowdhry, who was his student between 1973-75 has written about the experience at NSD in the essay, Personal Reflections on Ebrahim Alkazi and B.V. Karanth for Marg’s ‘Staging Change: Theatre in India’ issue, published in March 2019. She elaborates that no task was insignificant for Alkazi, “a facet he passed on to his students and which subsequently stood them in good stead, helping them comprehend that making tea, swabbing and cleaning the stage, ironing costumes, arranging the green room, cleaning the toilets were collectively as much an aspect of training as creating a character.”

Naseeruddin Shah, another of his prolific students, has called Alkazi an “inspiring teacher” in his memoirs, And Then One Day, one who appreciated him and didn’t make him feel “like a fool”. “Now I was under the wing of someone who could show me the way: he tried to teach us art appreciation, introduced us to classical music, to the myriad Indian theatrical forms, to serious cinema; he goaded us to read, to wake up early, to work on our instruments,” he writes.

Immediately after he joined the NSD, Alkazi realised that he would have to shift from the English-language theatre that he used to do in Mumbai to Hindi in Delhi. Around that time, Habib Tanvir’s Naya Theatre was also producing significant work in the language. “But it was in the 1960s, with Alkazi that Hindi drama became a phenomenon. He staged Oedipus Rex (1964), King Lear (1964) and Moliere’s The Miser (1965) in Hindi,” mentions writer Dipanita Nath in a 2015-article for The Indian Express. Yet another significant contribution was bringing out of theatre from the closed proscenium to the open vistas. He transformed monuments such as Ferozshah Kotla and Purana Qila as backdrops for plays like Andha Yug and Tughlaq — seminal performances which remain unparalleled even today. “Andha Yug and Ashad ka Ek Din became classics. People had never seen such sets or such precision in acting. I don’t think anyone has done spaces or scenography the same way,” says Kapur.

Andha Yug was staged in 1963 when India was still reeling from the loss to China. Alkazi’s decision to explore the moral dilemmas of war in a play set on the last day of the Mahabharata war was extremely pertinent to the times. Chowdhry writes about Alkazi’s use of values of the Japanese Kabuki theatre in the play. “Initially, it was disorienting to see Gandhari dressed as a Kabuki actor in a kimono and winged jacket, descending the steps of the ramparts of Feroz Shah Kotla, her long grown trailing behind her… . This production triggered criticism, but Alkazi was clear that an epic like Andha Yug, peopled with stories of warriors, nobles, kings and princes could not be performed in a realistic way but only through a traditional form, albeit far removed from its contextual environment,” she writes.

At the age of 50, Alkazi quit the NSD and set up a gallery, Art Heritage, with his wife, Roshan, to encourage artists working in the field of contemporary art. However, his commitment to theatre never ended, with him supporting various new projects and endeavours. Arundhati Nag, founder of Ranga Shankara in Bengaluru and one of the curators of the theatre segment for the Serendipity Arts Festival, describes Alkazi as the “complete man for theatre”. “Even though I didn’t get to work with him, I met him at a later date to speak about this mad dream of mine of setting up Ranga Shankara. He even contributed two lakhs for the project,” recalls Nag. She recalls an amusing incident that followed the meeting. At that time, Nag read the cheque as ₹20,000 and was thrilled, as 18 years ago even that was a lot of money. “It is only when I reached office that I actually saw the many number of zeros. Girish (Karnad) said, ‘Of course, it’s Alkazi. He will give you two lakhs and not ₹20,000’,” she laughs.

His influence has not escaped even the younger generation of theatre practitioners, who might not have interacted with him much. Quasar Thakore-Padamsee recalls the many stories that his father, Alyque Padamsee, would tell about Alkazi being a stickler for detail, and how he brought an aesthetic and ‘polish’ to theatre. “[Alkazi] placed a premium on discipline and research, be it theme, geography or costume. His interest in art gave him an aesthetic that was revolutionary for the 1940s-50s. By introducing actors to a different style so many generations ago, Alkazi saab inadvertently has influenced our tastes in 2020,” he says. Nag concurs, and adds: “People have done much for language theatre but not a single person has impacted ‘Indian’ theatre the way he has.”