A feminist assertion of identity through several cultures, Usha Akella’s I Will Not Bear You Sons is perhaps the first book of poetry to confront global violence against women, contextualised by patriarchal norms. The dedication is to “The Feminine: all her names, forms, aspects and expressions,” drawing attention to womankind irrespective of where they come from. The subjects are various: rape, caste, female genital mutilation, foot-binding, politics, terrorism and others. In all this, Akella’s allegiance is only to womanhood, irrespective of cultural differences.

In India, the title is a poignant reminder of the preference for a son, which finds expression in the phrase, Doodho nahao, pooto phalo — bathe in milk and give birth to sons — a blessing to a woman getting married. Akella cites a commanding male voice:

“I want a grandson. This is my desire,” he said to me.

But women are complicit too. Akella gives this an autobiographical thrust. Brought up in a Niyogi Brahmin family, her story of rebellion and search for alternatives leads to her own codes of mothering. Poems such as ‘From a Brahmin Niyogi Woman to a White Woman’ and ‘I Can’t/Won’t Write Like a White Male Poet’ track her journey from Hyderabad to the U.S. The intergenerational narratives mark the gendered experiences of a traditional “amma,” an immigrant poet-daughter and her American girl child. Craft and feminist polemic blend seamlessly here. Amma’s life was akin to an ant’s — a journey of obstacles: “woeman becoming woman, and the woman in woeman’s eternal dance/ inching toward gravity-free leaps.” By contrast, ‘Requiode for My Daughter Anannya’ negotiates differences between India and America.

I hold my daughter the way I did not know how to hold myself:

a petal, ant or snowflake.

I do not hold her the way India held me with her calloused and chapped fingers,

I hold her with fingers of light.

Women stand violated globally. There are examples of female genital mutilation in Africa, foot-binding in China, racial prejudices in Australia and England, religious bigotry in Europe — Akella’s list could go on. The solution seems twofold; 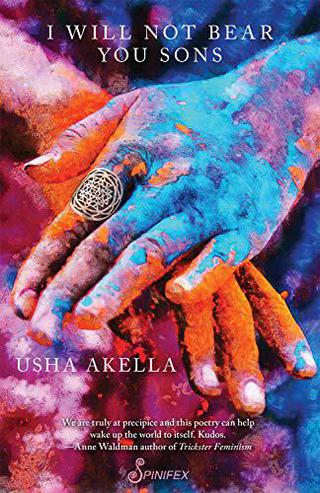 first, articulate the feminist demand for justice through poetry and the creative arts because much of the violence is related to inherited beliefs, and, second, find the power centre within political structures that can propel affirmative action. The poem about FMG — ‘Bolokoli (for Astur)’ — is an example of the former strategy, the onomatopoeic effect of “cut” chastising the perpetrators:

Welcome to the world little girl

The second strategy is illustrated in a poem to Kamala Harris, a leader who can spearhead change:

Wield the thunderbolt of Athena,

be the lungs for a forgotten dream…

Questions arise about inherited traditions that have relegated women to secondary spaces — should they be chucked? Akella wants them re-assessed. ‘Poems I Can’t Write’ contrasts the image of a quiescent Mary with a turbulent Kali; Meera bai and Manuela Sáenz, the revolutionary heroine of South America, strike up a conversation; Draupadi and Katyayini insist on being heard. What Akella proposes is a churning of the cauldron of social memory.

The pandemic may be the right time to uphold the flag of enlightened feminism because women are absent as a category in the gender-blind data. Yet, global narratives indicate their adverse conditions — an increase in domestic violence, child abuse, unemployment and hindered access to healthcare. Akella’s poetry is charged with feminist anger, which is polished into a fine poetic form.

computing deaths on the excel sheet

of consciousness; from the Spanish flu 20-50 million,

from the Black Plague 50 million, from Covid…

what black hole continues to gorge up souls

The book — powerful, passionate and resonant — calls for a coalition of women across borders.

I Will Not Bear You Sons; Usha Akella, Spinifex Press, ₹663 (Kindle price)

The writer is a retired Professor of English, University of Delhi, and a member of the English Advisory Board, Sahitya Akademi.