The adult world carries on, untroubled by a boy’s rage and humiliation. An extract from ‘Rising Heat’, Perumal Murugan’s first novel, published in 1991 and now translated for the first time

Whenever Amma’s brother and sister-in-law visited, Amma couldn’t hold still for a minute. He was Amma’s only brother, older and, more importantly, slightly better off than them. That was why Amma was in a frenzy that morning, as if possessed by a spirit. How many times would she walk back and forth between the house and the veranda! She held a flask in her hand and walked into the house. Then she turned back and went to the veranda as if she had forgotten something. Then she stopped to talk to them. And to Akka. Akka mumbled something quietly to herself. Appa and Maama were in conversation. His Annan was on the cot, curled and twisted like a tied-up sack. Even though the boy was awake, he continued to lie down and did not get up.

It was all the exhaustion from the day before. The boy’s irritation and anger at Amma had still not been assuaged. How sharp-tongued was this same Amma just the day before. Look at how she was fluttering about gleefully on seeing her brother and sister-in-law! If not for Appa, he would have lost control of himself in his ire. And wouldn’t have recovered from the fizzy light-headedness. Or the shame he was subject to — as if he was stripped naked, tied to a pole and whipped. All this over a paltry issue.

It all started two days ago in school. The boys were chasing each other around playfully in their classroom. The maths teacher had not yet arrived. The boy and Ravi were very close. They had plenty of petty fights and angry exchanges between them also. 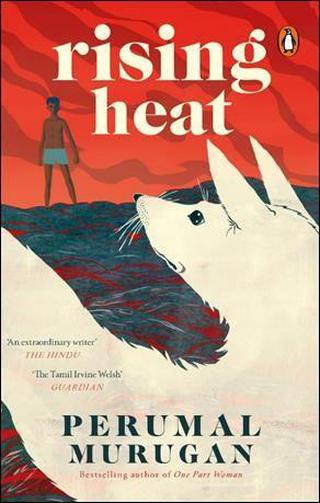 Sometimes they threw blows at each other and brawled quite fiercely. When the maths teacher did not show up, these two suddenly began to chase each other around the class. He jumped over desks and benches but Ravi chased him relentlessly. The whole class was chaotic and no one knew what was going on. Ravi chased him everywhere and finally caught him in the corner of the class. In the giddiness of his victory, he pinched him on his hand. Once on his cheek. Once on his hip. And as he pinched him on his thigh, he shouted out, ‘Dei, he isn’t wearing any underwear!’

Senthil, Murali and Balu all got together, surrounded him and pinched him hard all over his front and back. They mocked and laughed at him. He shrank into himself and held on tightly to his shorts. His eyes were brimming with tears and on the verge of spilling over any minute. The pain from all the pinches was also unbearable. Until then, he didn’t think that not wearing underwear was something to be made fun of. Ravi pulled him aside later and explained himself. With guilt.

‘Dei, I did all that in the madness of the moment. Thoughtlessly.’

Ravi gave a very awkward smile. He said after a little while, with some reservation, squirming the entire time, ‘You are a total country bumpkin, da. We are in tenth standard. We are going to be in plus one next year. We have to wear full pants like college students. We are now older, aren’t we? Wear underwear, da.’

At home, the boy couldn’t ask just anyone to buy underwear. He was too embarrassed to walk into a store and buy any by himself. The commotion they had created in class the other day was eroding his peace. With extreme reluctance, he bought a few from a vendor at a street corner. He kept the underwear in a bin. Amma was gathering clothes to wash when her eyes fell on them. ‘Whose are these?’ she asked.

‘These are mine, Amma. I bought them.’

‘Why now, we seem to have crossed international borders here. Is your penis not staying down if you wear only your shorts?’

Amma’s words fell like a scythe on his chest. He burst into tears and cried loudly. Appa came running and held him against his chest.

‘Get lost, you donkey of a woman! Don’t you know what to say to your son?’

‘What does she know? I will buy you better ones. What does she know about current trends? Will you cry for all this now?’ But Appa’s words did not mend the wounds. He didn’t eat dinner that night. Appa tried pacifying him in several ways and gave up after a while. Amma got a lot of scolding. That gave him some satisfaction.

‘Let it go now. What would Maama and Atthai think if I keep lying down like this just because I am angry with Amma?’ He got up and came out. Appa and Maama were sitting on the cot, Atthai was sitting on the plinth. She saw him and made a comment without moving her heavy body, tilting her head slightly from where she was.

‘So, the master had to sleep in until now? Kids who study well would have woken up early and started studying by now. But you?’

‘When did you arrive?’ he politely inquired with a wide grin and tried to slip away to wash his face. His eyes were puffed up and red.

He didn’t know why the two of them had come over so early. Maama was a masonry foreman. They lived in Karattur. Atthai always spoke in a chiding tone. Her eyes grew large, her nostrils flared up and her lips alternated between being bunched up and spread out when she spoke. She had a dominating demeanour. Maama was docile. Since the boy was so used to them, he wasn’t being particularly mindful around them.

‘Why don’t you come by… Maama has brought half a dozen jackfruits. Who’s there to eat all that? If you come over, you can bring some back, can’t you?’

Appa and Maama were engrossed in their conversation about politics and paid no heed to them. Both of them were ardent fans of ‘Thalaivar’, ‘the revolutionary leader’, one of the two most famous actors of that time who went on to become the chief minister of Tamil Nadu eventually. There was not a Thalaivar movie that Appa had not watched. He did not watch anyone else’s movies either. He didn’t care at all for the other popular actor — ‘Thilagam’, as he was known. The actor of all actors. ‘Thoppaiyan’ was what Appa called him. Pot-bellied. Earlier, there was a Rama Talkies where they screened Thalaivar’s movies back to back once every week. He always went only for the second show. Occasionally, he took the boy along as well. They would clean sand off the floor and watch the movie sitting on it. It was a miracle that the talkies had not exploded into bits with all the whistling and cheering from the fans. They were building a bigger movie theatre in Karattur town.

‘From now on, there won’t be any more dawns for the party with the symbol of sunrise. Back then, he partnered with that lady and managed to win.’

‘That was a higher-level election. Even though that fell apart, it was Thalaivar who won here. As long as he is alive no one can move him from the position.’

‘One should take heart. And look at that Thoppaiyan. An absolute miser who wouldn’t even shoo a crow away while he is eating for fear of losing crumbs to it. But this man, he doesn’t have any children, any successor. He will give away all that he has to the people.’

Because the two of them were in complete agreement, they could talk for hours on end like this. And if they started talking about movies, they would go over them scene by scene and relish every detail. They didn’t need food, water. He seated himself next to his aunt. Atthai called for Akka…