A fiction debut that captures memories of another love - gatewaylitfest.com 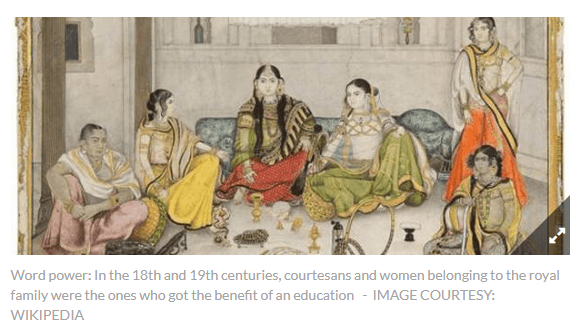 * In the 18th and 19th century, same-sex love wasn’t kept hidden the way it later came to be

Set in Lucknow during the era of the nawabs, Memory of Light, academic and activist Ruth Vanita’s fiction debut, is a love story of two courtesans. 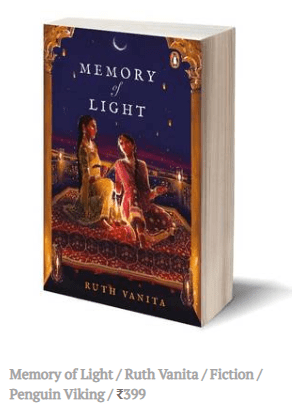 The same-sex romance between Nafis and Chapla is not plotted around breaking taboos; rather it takes readers back to a time when a language and ritual for it already existed, definitely for the courtesans, and possibly for the aam janta too. Vanita says, “The Kama Sutra has an entire chapter on (sexual) relations between men, and in the 1930s, when British researcher on sexuality, Havelock Ellis, enquired about same-sex love in India, he was informed of female couples in the cities as well as in jail,” says Vanita, co-founder of the influential feminist magazine Manushi and a liberal arts professor at the University of Montana, US. 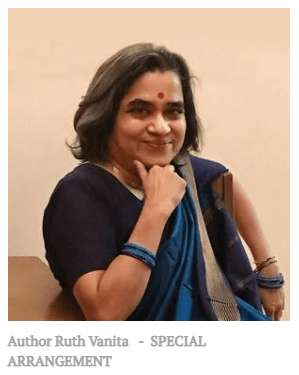 Like her thoroughly researched and bold works of non-fiction — Queering India,Lover’s Rite and others — Vanita’s novel too is deep and layered with striking details and real-life figures from the period. The narrative voice is spirited, the story relatable in its timeless expression of human experiences and love, and the poetry is reminiscent of a bygone era. Edited excerpts from an interview with BLink:

Fiction allows authors to weave their own experiences and personalities into stories. Which character in the book resembles you the most?

As they say, a part of the author is in every character — and it’s true because the writer creates them all. Being a writer, Nafis, the narrator, is probably more like me. Some of her dream sequences are reworked versions of my own dreams.

One doesn’t come across dream sequences in very many books…

A lot of older books have dream sequences, such as Iris Murdoch’s novels. I think, these days, creative writing students are told not to write about dreams, but we spend one-third of our lives sleeping, and dreams are a very important part of life. They’re part of all great texts [such as] the Bible, [of] Homer, [those in] Sanskrit…

Nafis writing verses for Chapla and the enduring uncertainty of the relationship are much like your association with a girl you liked during your MA programme — of which you’ve spoken about in the past. Did that episode inspire the love story in Memory of Light?

Sure, a lot comes from one’s own experiences; some are obviously made up. In this case, though, it’s not that particular one [association]. That was just a crush. In the book, it’s a full-fledged relationship, and Nafis has had other relationships before Chapla.

Nafis is a thinker, philosopher and poet, whose help poet Insha seeks for the first Urdu grammar book. Are you trying to emphasise the intellectual standing and modern lifestyle of courtesans here, in the way you did in Dancing with the Nation,Courtesans in Bombay Cinema?

Insha actually wrote Dariya-e-Latafat, the first Urdu grammar book. Words used to describe men interested in men, feminine men etc [that appear] in my book are from there. Insha’s friend Rangin, another poet who contributed to Dariya-e-Latafat, had collected words from vendors, migrant labourers, everyone. Though this particular girl (Nafis) isn’t mentioned, Rangin credits women from kothas and other women for many words he picked up. For men, kothas were also places to have friendships (not necessarily sexual) and conversations with women they weren’t related to. At the time, male-female friendships mostly weren’t possible for women other than courtesans. Their friendship with male writers is seen in Urdu poetry of the time.

Urdu poetry rekhtiwas believed to be written by men in a woman’s voice. But your book seems to suggest that women wrote it too…

Gender, Sex and The City, my 2012 book, is entirely on Urdu poetry from the late 18th and 19th centuries, mostly in Lucknow. After my research [on the subject], I realised that rekhti is regular Urdu poetry, mostly in ghazals, except that the speaker is a woman, talking about her life— shopping, cooking, friends and lovers, mostly female lovers. Rekhti written by women — tawaifs and queens/princesses, who were the two educated groups — has disappeared, as has lots of poetry written by men. What we still have is a few rekhti by major Urdu poets such as Insha, Rangin, Jur’at and others. Women wrote rekhta too (poetry with a male speaker). There isn’t much difference, except that men don’t write about domestic details such as servants. Both talk about affairs with women and men, about animals, the whole range of life in the city.

Does Bollywood’s portrayal do courtesans justice?

The famous two or three films on courtesans don’t, but watching 235 movies for Dancing with the Nation gave me a larger picture. Most people watch, at most, 5-10 courtesan movies, which offer a glimpse, but lots of 20th-century stereotypes seep in.

For instance, the weeping or self-denigration you see in Pakeezah (1972), or saying things like “I’m a walking corpse” wasn’t true of courtesans, especially before the 1970s. Most other older films, but also a few from the 1990s, show tawaifs as well-read; in Zindagi ya Toofan (1958) Nutan reads her poetry in an all-women’s mehfil as courtesans did in real life. But a few famous films portrayed [the notion] that to marry, tawaifs had to be virgins. In Pakeezah, for instance, desperate measures are taken to protect the protagonist’s virginity, but in Sadhna (1958), Vyjayanthimala,playing a tawaif who was raped in her youth, does marry in the end. Some later films such as Angaaray (1986), starring Smita Patil, also show tawaifs who aren’t virgins, getting married. Sunghursh (1968), starring Vyjayanthimala, portrays tawaif Munni (professional name Laila-e Aasman) as a rich and famous star, travelling from city to city.

But most films post the 1970s follow the Pakeezah route of the virgin tawaif and reduce them to sex workers. To some extent, it does reflect reality as this abasement gradually did happen and was completed by the ’70s and ’80s. Yatra (2007) captures this journey that courtesans underwent — Rekha starts out as a celebrated classical singer and ends up forced to wear revealing clothes and do item numbers for people from the street who don’t appreciate classical music at all. Use of words such as randi and vaishya in films increases from the 1980s.

What made you learn Urdu? How did it further your understanding of same-sex love?

I started learning Urdu in order to read rekhti. In the early 2000s, the few rekhti works available in print had portions filled with asterisks wherever the editor considered the poetry too explicit. So I needed to read the manuscripts. Rekhti talks with great humour about sexual matters. Same-sex love wasn’t kept hidden the way it later came to be. There was a vocabulary for it — zanakhi (woman’s female lover), chapat-bazi (lesbian sex), etc — and ceremonies such as exchanging elaichis to form a female couple.

After ceremonies where men exchange turbans, and women their odhnis, characters in the book call themselves brothers or sisters. Were these euphemisms for same-sex couples?

Insha and Rangin weren’t lovers, as far as we know. Exchanging turbans is akin to tying a friend rakhi. But back then there was a flowing continuum in which you could be friends, close friends or romantic friends and the relationship could become sexual or erotic… Tawaifs had relations with men, and had children too, but [they] could also have relationships with women. Today, we want clear-cut categories — gay, straight etc — but that’s not how most people in the past saw themselves. In Dedh Ishqiya, a wonderful film set in the same world as rekhti, the begum and her servant are lovers. But at one point the begum says, “She’s my sister, my friend, my love, my life… everything” — that encapsulates it. 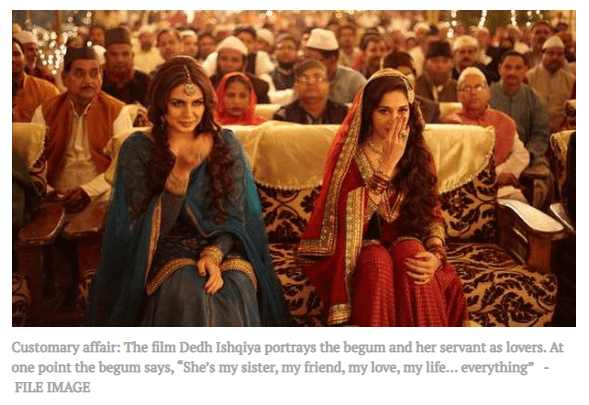 High-heeled shoes, deer as pets… did 18th-century India really have all this ostentation? Why did you choose to write about this period and what kind of research went into recreating it?

Kafsh, which are high-heeled shoes of a particular kind, were mentioned in rekhti. I didn’t have to research for this book because I had already spent five to seven years researching for Gender, Sex and the City. That whole world was alive in my mind. I could imagine moving in it, how things would’ve been; people like Insha captured my imagination. That’s how the novel happened. Animals were integrated into people’s lives; [they] ran in and out of homes. Not just pet deer, they kept squirrels and what not; Insha had elephants.

I was interested in writing about this world that looked at pleasure and play in a different way. Everyone wasn’t defined by their work alone. Sharad (a character in the novel), for instance, isn’t defined by what we’d call ‘sexual identity’ or just his work as an architect and designer. He has many interests. Such personalities haven’t disappeared, but today when we meet people, we first ask them what they do. I also wanted to see how a love story like this would play out in a society that’s not as prejudiced as the one I grew up in, [and] doesn’t have all the West-imposed horrors, fears and anxieties to the same extent.

Memory of Light is your fiction debut. Will it help in reaching a wider audience? Has non-fiction become too limiting?

I’m still writing non-fiction. But I wanted to try another kind of writing; it sets a different part of yourself — your brain — working. Non-fiction also has a wide audience; therefore, my earlier works aren’t entirely for an academic audience. I use simple English so that any general reader can pick up my books. Despite this, because fiction tells a story, it’s probably more popular.

What are you working on now?

A book on gender and dialogue in the epics, and [I’m] also translating Mahadevi Varma’s Mera Parivar.

Pooja Bhula is a Mumbai-based journalist